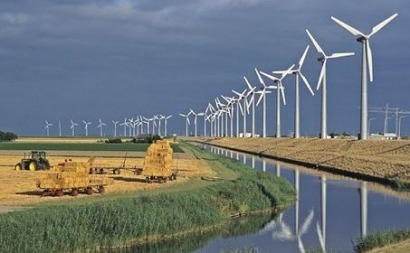 In a study published by the NGO Climate Without Borders, the city's utility company, Stadtwerke Bonn, ranked first among 20 major German municipal utility companies in their responsible use of renewable energies and the efforts to reduce carbon dioxide emissions.

The study evaluated the percentage of renewable energies within the municipal utilities’ electricity mix as well as the carbon dioxide emissions generated per kilowatt hour (kWh).

Bonn with a population of approximately 320,000, located in the valley of the river Rhine on the south border of the State of North Rhine Westphalia, achieved the lowest emission value:  191 grams (g) of carbon dioxide (CO2) are emitted per kilowatt hour (kWh) electricity generated for the residents of Bonn, compared to an average of 508 g/kWh nationwide.

Bonn's high rank in the study is a direct result of the city actively pursuing measures to increase resiliency and reduce greenhouse gas emissions such as carbon dioxide since the 1990’s. Infinite energy sources such as wind, water, and solar energy (as opposed to fossil energies such as coal) are key in the city’s effort to reduce greenhouse gas emissions.

While the first commercially used wind turbines were installed in Germany in the early 1990’s, the implementation of the federal renewable energy law (Erneuerbare Energien Gesetz, EEG) in 2000 really set the stage for alternative energy. In 2013, working towards meeting national and international regulations to combat climate change, the State North-Rhine Westfalia (NRW) enacted state-level climate protection regulation defining specific emission thresholds: Emissions from carbon dioxide shall be lowered 25% by 2025 and 80% by 2050 (baseline year: 1990).

In support of these targets, the share of wind energy in the state's electricity mix is planned to be increased from currently approximately 4% to 15% by 2020. This is to be achieved by re-powering – replacing older wind energy plants with newer, more efficient ones – and by installing additional wind turbines. The proposed new wind energy turbines measure as high as 185 m (over 600 feet) and are able to tap into additional wind energy yields, thereby generating up to 3 MW more consistently.

A detailed and refined analysis of those seven sites within the City of Bonn was needed to evaluate their usability for wind energy production. Clarendon Hill Consulting together with the local planning firm Gesellschaft fuer Umweltplanung was selected to conduct the analysis.

Clarendon Hill Consulting (ChillCons) has in-depth expertise in conducting comprehensive studies and critical assessments for renewable energy projects in the U.S and in Germany. In an exhaustive approach, ChillCons and its partner screened, analyzed and evaluated specific criteria for their potential project impacts from a wind farm in each of the seven sites.

The project goal was to assess the sites and identify any critical issues - which would preclude the construction of a wind farm at the specific site - early on to eliminate these sites from further detailed analysis. The ChillCons team analyzed criteria including wind energy yield, landscape preservation (scenic viewsheds), and identified protected natural species, European natural protection areas and flood prevention areas.  The analysts also looked into the existing power grid infrastructure and possible locations to connect into the grid and developed installation scenarios for the potential construction sites for each of the potential wind energy areas. Potential interferences with close-by radar stations and air traffic from the Cologne-Bonn international airport were another critical factor that was evaluated for each of the seven areas.

Viewshed analysis is an important part of the site assessment

One criterion of ChillCons analysis was the aspect of preserving the landscape and scenic viewsheds. Bonn is a densely settled City area located in a scenic setting: The wide river Rhine parts the City and is bordered by the mountains of the Siebengebirge. The hill area of the Siebengebirge is not only protected by German environment protection laws but is also home to various castles and a distinct tourist destination.

The region boosts various hiking trails and is valued as an important recreation area by local residents, national and international tourists. The views from and to the mountains of the Siebengebirge are therefore very important for the community. ChillCons conducted a viewshed analysis for all seven potential wind areas to determine the impact of a 185 m (over 600 feet) tall wind tower. Thereby Clarendon Hill considered potential impacts on the adjacent community as well as on the regional recreation areas.

ChillCons viewshed analysis resulted in a ranked list of the seven areas based on the level of impact a constructed wind farm would have on each site.A low visibility and low visual alteration of the original character of the landscape were deemed most advantageous.

ChillCons and its partner conducted the criteria screening and impact analysis for the criteria on the seven sites thereby using a Geographic Information System (GIS) extensively. GIS is incredibly valuable for analyzing and overlaying information as well as for visualizing the findings. The consultants produced various maps for all criteria and sites to highlight the findings from their study.

Once all areas were screened, the researchers incorporated the screening results into an inclusive evaluation matrix encompassing all criteria for the seven sites. A final scoring for each site was conducted. This step proved crucial for understanding the big picture. By analyzing the combined potential project effects in all areas, ChillCons team gained a broad comprehension of the implications a potential wind farm construction would have not only within the assessed locations but also city-wide i.e. due to an altered viewshed.

The overall comprehensive analysis resulted in a display of the seven sites ranked according to their criteria evaluation results.

The detailed analysis concludes with the findings that most sites within the City of Bonn face several obstacles to develop them for wind energy production. Based on the detailed screening, two sites currently seem feasible. However, due to some new developments related to changing air traffic patterns (flight route for emergency hospital) further screening is warranted before the sites may be developed.

The study lead by Clarendon Hill Consulting is an example of a cost effective comprehensive strategic analysis to evaluate renewable energy projects early on in their project stage. In-depth criteria analysis, GIS analysis and mapping along with strong visualization methods make these types of studies valuable for every municipality or developer to get an early handle on their potential project developments. Critical issues are detected early in the game, providing savings on additional detailed studies down the road.

Isabel Kaubisch founded Clarendon Hill Consulting (ChillCons) in 2010 after having worked in the planning and consulting business for about 8 years. Isabel has managed and worked on multiple national and international interdisciplinary projects in the areas of strategic, urban and environmental planning thereby using Geographic Information Systems extensively. Isabel has also provided public outreach services to various clients. She owns a German Diploma in Geography (MS equivalent) and a Certificate from Tufts Universities Urban and Environmental Planning Program. http://www.chillcons.com.