Wednesday, 23 November 2022
0
REM
H2B2, a global technology company in the hydrogen energy sector, and PowiDian, a French technology company with expertise in hydrogen system integration, are collaborating to provide the future Rijnstate hospital in Elst (The Netherlands) with a system that will enable the hospital to cover up to 60% of its energy needs. 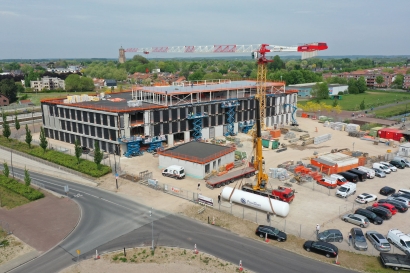 In March 2023, H2B2 will deliver to PowiDian an EL20N electrolyzer that will operate as part of a P2P system to supply electricity by combining solar PV and hydrogen. P2P systems take advantage of the potential of renewable energies, in this case, solar photovoltaic energy, mitigating thanks to hydrogen its main obstacle: certain production peaks are wasted because energy production does not coincide with demand.

The installation will also include a 100-kW fuel cell and two storage tanks with a capacity of 100 kg of H2, supplied by Powidian.

Thus, the hospital will use the electrical energy produced by the photovoltaic panels during the day. If the production exceeds the center's needs, the H2B2 electrolyzer will transform it into hydrogen, which will be stored in the tanks. During the night, or in situations where the PV power source does not produce enough electricity for the hospital, the fuel cell will transform the stored hydrogen into electrical energy.

This agreement between H2B2 and PowiDian with the Rijnstate hospital is one of the first examples of how the healthcare sector is also joining the transition to decarbonization. The project will save 42,000 m3 of gas per year, totaling around 600,000 m3 over the next 15 years. During this time, the emission of 2 million kg of CO2 will be avoided.

According to Florencio Ferrera, CEO at H2B2, "The process of decarbonizing the healthcare sector in Europe is an ambitious plan that is already underway in places like The Netherlands. Hydrogen is an energy vector that, combined with renewable energies, will play a major role in thIS energy transition. H2B2 contributes cutting-edge technology to advance the development of green hydrogen projects."

The inclusion of the hydrogen plant at the Rijnstate hospital is part of the Green Deal agreed upon between the Dutch government and the healthcare sector. Within this framework, the hospital has set a target of using 49% renewable energy by 2030 and 95% by 2050, and promoting the sustainability of the surrounding areas.

Jean-Emmanuel Boucher, sales director for PowiDian, explains that hydrogen will help decarbonize the construction sector, not only in the healthcare field, due to its storing capacity.

“Energy storage devices using hydrogen have a great future in construction, especially for buildings requiring electrical and thermal energy input. These devices make it possible to reduce the carbon impact of the building's operation while reducing its energy bill. H2B2, due to the width of its range of electrolysers, makes it possible to address a wide variety of building sizes”.