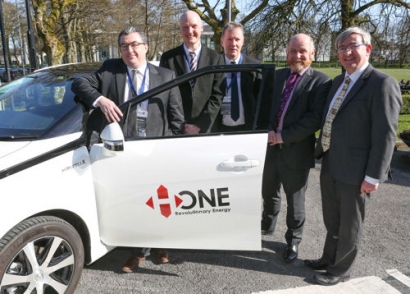 The report was funded by Northern Ireland’s Department for the Economy to contribute to the evidence base for the development of a new Energy Strategy.

The report reviews progress Northern Ireland is making towards its decarbonization goals, its unique challenges, and opportunities, and identifies the potential roles for hydrogen in enabling greater renewable energy deployment, through energy storage and reduced curtailment and sector coupling. It then identifies energy demand sectors that hydrogen could help in decarbonizing, such as buses, trains, and its use in the gas grid for heating. The research team presents the results of case studies for green hydrogen, hydrogen produced by electrolysis powered by renewable electricity, deployment in Northern Ireland in 2030.

Ian Williamson, CEO of HyEnergy and President of the European Hydrogen Association said, "We see this report as just the start of the process. Hydrogen is becoming key to the decarbonisation plans of many countries. The development of a Northern Ireland hydrogen strategy will highlight the Province’s ambition internationally. It will provide a platform for both enhanced renewable energy penetration into the region’s energy mix and  deliver highly skilled jobs over the next decade.”

Scenarios for decentralized, regional, and centralized electrolysis and end use are explored. The results demonstrate the technical, environmental, and economic feasibility of hydrogen production and use at scale in Northern Ireland. The report goes on to explore the unique strengths Northern Ireland can bring to bear on hydrogen in the energy transition. These include world class onshore and offshore renewable energy resources, an entrepreneurial and innovative engineering and manufacturing sector, strong and modern electricity and gas interconnections with Great Britain and Ireland, and large-scale salt cavern storage sites.

The study's lead researcher, Dr. Rory Monaghan of the NUI Galway Ryan Institute for Marine, Environment and Energy Research, says, "This report really just scratches the surfaces of the positive impact hydrogen could make in Northern Ireland's energy transition and economy. The potential for clean and secure energy to attract investment, as well as provide local jobs in emerging hi-tech sectors could transform Northern Ireland. We hope that our work can spur further interest in hydrogen's role in Northern Ireland's energy future."

Dr. James Carton, Assistant Professor at Dublin City University, said, "Northern Ireland is leading the way in the integration of renewables with other sectors such as transport, using green hydrogen. This report highlights the fervent prospect for hydrogen to become a key part of Northern Ireland's economy and low carbon energy transition."

GenComm project co-ordinator Paul McCormack concluded, ‘”As we develop the Hydrogen road map for Northern Ireland it presents fantastic opportunities commercially, environmentally and socially for us to capture and build upon. True energy innovation is about developing and delivering sustainable solutions that meet community and environmental need. Optimizing solutions with SMART H2 meets the twin goals of achieving energy security and sustainability. This report presents opportunity to translate energy innovation into action.”