Wednesday, 07 December 2022
0
Robin Whitlock
Rishi Sunak’s administration will support the growth of solar farms and has rejected the prospect of an effective ban put forward under Liz Truss. 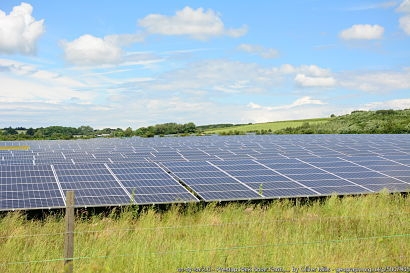 Yesterday, two ministers ruled out extending planning protections for high-grade farmland to moderate quality ‘3b’ land, as had been floated by former Environment Secretary Ranil Jayawardena. As almost all solar farms are situated on such land, it would have had a seriously adverse impact on the ability of the sector to deliver on the Government’s target to reach 70 GW of generation capacity by 2035, cutting bills and carbon on the way.

The lowest grades of land – 4 and 5 – are generally in upland areas, far away from access to the grid and often subject to development restrictions.

Speaking to the Commons’ Environment Food and Rural Affairs Committee, Environment Secretary Thérèse Coffey backed “a lot more” solar generation on farms, including on 3b land. She also raised a challenge that solar farms commonly face – connecting to the grid. Coffey earlier told the MPs that that she would be driven by the evidence on land use and food security, an implicit rejection of false claims that the solar industry presents a threat to food security.

Coffey had previously given a more ambiguous response when questioned on 3b reform by Labour’s Shadow Climate Minister Kerry McCarthy MP.

The day represented a broader victory for renewable energy, as the Government pledged to lift the longstanding ban onshore wind power and a plan to build a tidal barrage across the Mersey was revealed. On Monday, a 50 MW solar farm in Devon also received approval on appeal from Housing and Planning minister Lucy Frazer, one of the first to be backed by the Sunak administration. The decision rejected unwarranted and unevidenced claims the project would be harm food security and that an adjoining battery storage facility would pose a hazard.

As Solar Energy UK’s recent briefing on the topic shows, by providing farmers with a steady and reliable income, solar can promote food security by helping to keep them in business. Moreover, it also combats what the Government’s own Food Security Report has described at the number one threat to our food supplies: climate change.

“We shouldn’t be stopping farmers who want to diversify their income from doing that as that would be harmful, so I’d have no problem with them putting some solar panels down on 3b land” said Farming Minister Mark Spencer, clarifying Theresa Coffey’s position in The Guardian. Mr Spencer added that there “has to be a balance” with food production, as the existing system provides.

“Yesterday was a turning point for the entire renewables sector” said Chris Hewett, Chief Executive of the trade association Solar Energy UK. “It will be a great relief to the solar industry to hear that that Thérèse Coffey supports existing planning rules, which have successfully encouraged development away from the best-quality agricultural land while recognising the critical need to expand solar farms in response to the climate and energy price crisis. This looks like a significant shift from the anti-solar rhetoric of her predecessor.”

The Defra ministers’ comments accord with a series of positive statements on the role of solar and other renewables in combatting the energy price crisis and commitments to support the fast-growing sector through policy.

In the Commons on last month, Exchequer Secretary to the Treasury James Cartlidge said that the new government is “serious about delivering cheaper, cleaner and more secure power” and will include solar farms in future auctions for Contracts for Difference.

Mr Cartlidge added that the English planning system is “designed to take account” of the need to balance “community interests, food security and securing a clean, green energy system for the future”.

On 27 October, only two days after Sunak took power, Kerry McCarthy described the planned solar farm ban as “nonsense”, asking if the “ill-thought-out proposal” would be maintained.

Spencer replied that the government will set out its land use change principles “to ensure that food security is balanced alongside climate, environment and infrastructure outcomes. We are seeking to deliver as much as we can with our limited supply of land to meet the full range of Government commitments through multifunctional landscapes.”

Furthermore, on 3 November Climate Change Minister Graham Stuart said that “ground-mounted or roof-mounted solar” was needed, alongside wind power and other decarbonisation technologies, to deliver the UK’s “extremely challenging” climate objectives, “but which we are on a firmer path toward than any other major economy on Earth”.