Thursday, 09 August 2018
0
Robin Whitlock
The American Wind Energy Association (AWEA) has named Representative Earl Blumenauer, D-Ore., as a US Wind Champion for his role in shaping US leadership in wind power. 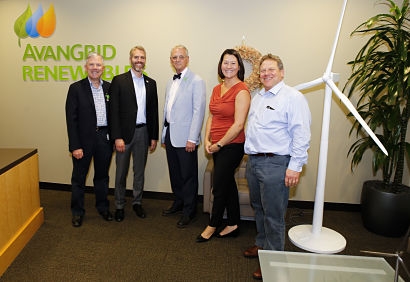 Blumenauer was recognised for his support for wind energy at an event on 7th August by Avangrid Renewables, during American Wind Week. AWEA is presenting the awards to select members of the 115th Congress who have taken action in support of American wind energy. The award ceremony is a highlight of American Wind Week, which is taking place currently until 11th August and acts as a national celebration of US leadership in wind power.

“Wind energy powers homes, reduces carbon pollution, and creates jobs in rural communities - and the Pacific Northwest is leading the way” said Rep. Blumenauer. “Now more than ever, we should be expanding access to clean energy sources that are affordable, efficient, and aid in our efforts to combat climate disruption. Our fight continues in Congress.”

Kevin Lynch, Avangrid Renewables’ managing director of external affairs praised Blumenauer’s efforts on behalf of the growing number of farmers, ranchers, and their families and communities who benefit from wind energy investments, stating that Avangrid Renewables is now running a growing network of wind farms thanks to his vision.

In 2017, wind provided over 11 percent of Oregon’s in-state electricity production - enough to power 604,600 average homes. Investment in wind is also an investment in jobs, creating nearly 3,000 in Oregon. Wind has become a new ‘cash crop’ for the state, with total land lease payments to farmers and ranchers between $5-10 million each year. Furthermore, the Department of Energy’s Wind Vision scenario projects that the state could produce enough wind energy by 2030 to power two million homes.

This year marks the second annual celebration of American Wind Week, following the emergence of wind as America’s largest source of renewable energy capacity in 2017. The US has become a global leader in wind power thanks to world-class wind resources and technological innovation. This also represents economic opportunity, secure domestically produced energy and cleaner air. A record 105,000 Americans now work in wind power, supplying over 6 percent of US electricity, and creating clean air benefits worth more than $8 billion each year.