Tuesday, 29 May 2018
0
Robin Whitlock
Vattenfall has now installed the final wind turbine at the European Offshore Wind Deployment Centre (EOWDC), the wind farm located off the coast of Aberdeen Bay. 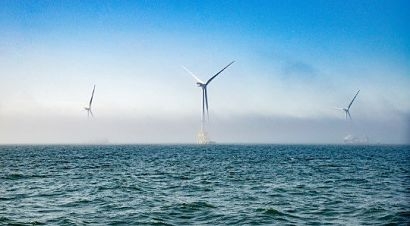 The installation of the final turbine completed what could be the world’s fastest installation of a gigantic suction bucket jacket foundation, marking the fourth offshore wind industry ‘first’ for the project. The turbine was installed on Saturday 26th May, coming just nine weeks after the first foundation for the 11-turbine EOWDC scheme was deployed in the North Sea.

“This is a magnificent offshore engineering feat for a project that involves industry-first technology and innovative approaches to the design and construction” said Adam Ezzamel, EOWDC project director at Vattenfall. “Throughout construction, the project team and our contractors have encountered, tackled and resolved a number of challenges. The erection of the final turbine is a significant milestone, and with the completion of array cable installation, we now move on to the final commissioning phase of the wind farm prior to first power later this summer. One of our 1,800 tonne suction bucket jacket foundation was installed in what we believe is a world record of two hours and 40 minutes from the time the installation vessel entered the offshore site until deployment was complete. What makes this even more significant is that the EOWDC is the first offshore wind project to deploy this kind of foundation at commercial scale while it’s also the first to pair them with the world’s most powerful turbines”.

The EOWDC is scheduled to generate its first power in the summer, producing the equivalent of more than 70 percent of Aberdeen’s domestic electricity demand and annually displacing 134,128 tonnes of CO2. Nine of the eleven turbines are 8.4 MW models, while the final two are 8.8 MW.