Wednesday, 13 April 2011
3
On Monday, Smart Hydro Power unveiled its first 5-kW micro-hydro turbine system to an international audience. Despite pouring rain, the company’s bright-blue turbine was calmy launched into the water during an event which took place at E.ON´s hydroelectric facility on the Isar River in Germany. 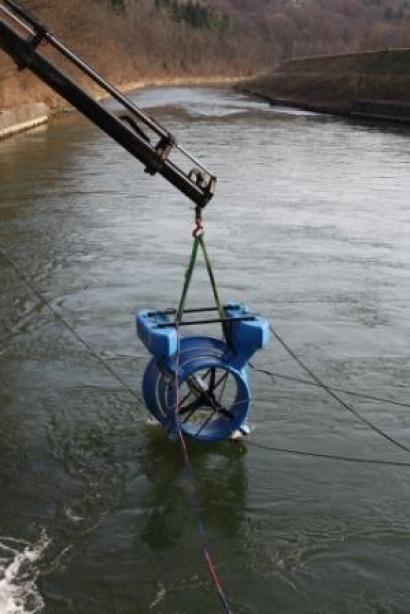 Smart Hydro Power reveals that unlike other renewable sources such as solar photovoltaic, its new turbine is capable of supplying domestic appliances with converted AC power immediately. “Because the turbine doesn´t require further infrastructure or major maintenance costs, it can compete with diesel generators on a micro grid, as well as standard electricity provided via the public grid,” it said.

Smart Hydro Power´s first testimonial was recognised in a speech by Rafael Castillo, the Energy Minister of the Federal State of San Martin, Peru who said: “This turbine will enable increased economic development in rural regions such as San Martin”. Smart Hydro Power will donate its first turbine to San Martin on 1 June 2011 to power a local village, hospital and school.

In light of the catastrophe in Japan, many guests came in support of safe and clean energy coming from hydro. David Sweet of the World Alliance of Decentralized Energy (WADE) noted, “This technology offers a clean, affordable and sustainable solution for developed and developing countries. For many of the 1.6 billion people who lack access to modern power systems, Smart Hydro Power can be the key to profound improvement in the quality of daily life”.

As part of the event to launch its new turbine, Smart Hydro Power hosted a small roundtable discussion entitled “Decentralised Electrification: A Unifying Framework for Decentralised Energy”. The roundtable consisted of 10 representatives of various public and private entities with active interest in global electrification, research and development projects. Some of the participants included Dr. Maritta Koch-Weser of the non-governmental organisation Earth 3000 (Germany), Wim Klunne of state-funded research institution CSIR (South Africa), and Klaus Jorde of the energy consultancy group Entec AG (Switzerland). The focus of the meeting was to streamline the success of electrification projects in developing countries.

“Our discussion highlighted the necessity for a translation between social scientists and engineers in the implementation of decentralized electrification projects,” commented Karl Kolmsee, CEO of Smart Hydro Power and moderator of the roundtable.

Tags: Hydro ,Germany ,Grid ,Africa ,Electricity ,Hydroelectric ,Japan ,Photovoltaic ,SAF ,Solar
Add a comment
Ken Vokey
I love your river derived turbine generator. I invented something similar some years ago. Mine has a pair of pontoons as well. However my invention is for ocean and river, I can take advantage of the waves of the ocean. About 15 years ago I went to Ottawa seen a hydraulic engineer all natural resources. She said I should patent it. She told me to find a investor. Please contact me at 705-734-1950 or email me.
Henry Dee
I\'m fascinated by this technology and need it
Kaderi.Richard
Hi Genltemen, I am an entrepreneur from Burundi, i am in agro industry business but i am also very active in the Rural development project and i am very interested with the ystem ,i want to know more especially the price and the size of the equipment and even the installation procedures. Thanks
storage