Friday, 06 July 2012
0
Toby Price
Major industrial corporations from Asia are increasing their stakes in solar cooling.A multi-country research project of the IEA Solar Heating and Cooling Programme (IEA SHC), which is supporting the market and drawing strong interest from these players. 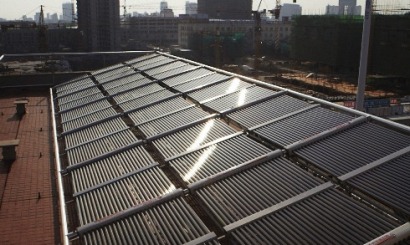 Large industrial corporations like Hitachi Plant Technologies and Mitsubishi Plastics have started to enter the solar cooling market. Already last year, Hitachi announced its aim of achieving a turnover of about 5 billion Yen (€50 million) by 2015 with their solar powered air-conditioning system based on parabolic trough collectors and absorption chillers.

Meanwhile, this March, Mitsubishi put their sales target at 3 billion Yen (€30 million) for their new compact adsorption chiller series by 2015. Both companies are showing a large interest in the solar cooling business field, which will be supported by research of a multi-country project of the IEA Solar Heating and Cooling Programme titled "Quality Assurance and Support Measures for Solar Cooling (Task 48)".

"We are thrilled to see that solar cooling is gaining traction in the industry", says Dr. Uli Jakob, who leads the communications efforts in Task 48."The announcements of major industrial corporations provide additional momentum in the already dynamic solar cooling market".

And interest comes not only from Japan. With China recently joining the IEA SHC, several Chinese companies have indicated their strong interest in participating in the project. Amongst them are Vicot Air Conditioning (solar cooling system supplier and absorption chiller manufacturer), Shuangliang (absorption chiller manufacturer), and Himin Solar (solar collector manufacturer). Even the Shanghai Jiao Tong University, a renowned solar cooling institute, has been recently approved by China to officially become an active expert joining the Task 48 group.

Important market players in other countries like Thermax from India have also expressed their keen interest in this project.

The next expert meeting of Task 48 will take place in Gleisdorf (Austria) on 10-11 September 2012 and is expected to confirm that solar cooling is a hot topic especially in Asia.

Solar cooling is also a major topic at the first International Conference on Solar Heating and Cooling for Buildings and Industry, which takes place 9-11 July 2012 in San Francisco (USA). Several presentations and many more posters at the event will cover the various aspects of this application (components, systems, best practices) in buildings as well as for refrigeration. The conference is hosted by IEA SHC and takes place in conjunction with Intersolar North America.

Last month, the IEA SHC showed similar presentations at the solar cooling session of Intersolar Europe on 13 June 2012 in Munich (Germany). These presentations covered the following topics: Where does solar cooling stand today?; An application of solar cooling in the Gulf region; and Solar thermal or photovoltaic cooling? and are available for download here.

“With interest in new solar thermal applications increasing and numerous innovative high efficient solar collectors entering the market, solar cooling was more than ever a highlight topic at the recent Intersolar Europe fair in Munich”, explains Daniel Mugner, manager of the IEA SHC project on quality assurance and support measures for solar cooling (Task 48). “At our session alone, some 60 people listened to the latest developments in cooling with solar thermal energy, also known as ‘solar cooling’”.