Friday, 30 July 2021
0
Robin Whitlock
Hybrid cars built in the Midlands will soon be carried to continental Europe via an eco-locomotive operated by DB Cargo that runs on greener fuel made from used vegetable oil. 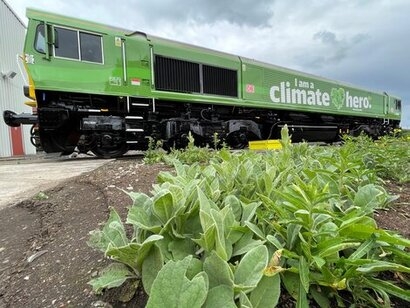 The train, named “I’m a climate hero”, to reflect its new role, is an important step in the transition towards the Government’s goal of Net Zero by 2050. It highlights the important role that rail freight can play as part of the DfT’s aims to make transport greener, as outlined in the Government’s recent Transport Decarbonisation Plan.

DB Cargo is the largest rail freight operating company in the country and has been trialling and expanding its use of HVO as a way to reduce carbon emissions in the short term. The new service using HVO will transport Toyotas built in Derby to continental Europe through the Channel Tunnel and import Toyotas on its return leg.

“We are boosting British business whilst cutting carbon” said Rail Minister Chris Heaton-Harris. “This is what building back greener is all about. Trains are one of the most eco-friendly ways to transport goods and, through ingenuity and innovation, DB Cargo are leading the way in making it even greener.”

DB Cargo CEO Andrea Rossi added that HVO is one of the world’s purest and greenest fuels and has an important role to play in helping DB Cargo UK and its rail customers decarbonise their operations and that this will be the first time the company will have used HVO on an automotive service and one bound for the continent.