Friday, 22 April 2022
0
Robin Whitlock
Budweiser Brewing Group UK&I has announced a major transport scheme at its Magor Brewery to reduce CO2 emissions, as part of the brand’s ongoing sustainability programme and ambition to reach net zero at its UK breweries by 2026. 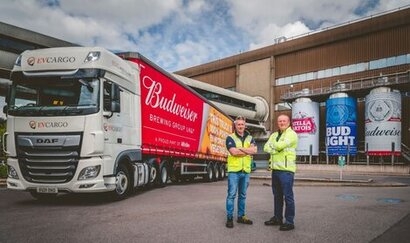 The brewer has partnered with logistics provider EV Cargo to switch half of the HGV delivery trucks at its Magor brewery from traditional diesel fuel to hydrotreated vegetable oil (HVO), delivering an immediate 92 percent reduction in greenhouse gas emissions per every kilometre driven compared to diesel. The move will significantly reduce CO2 emissions and is a key strategic initiative aligned with Budweiser Brewing Group’s sustainability targets to reduce emissions across its value chain.

HVO is a sustainable fuel derived from vegetable and animal oils. Budweiser Brewing Group will conduct an initial transfer of 20-25 vehicles to HVO fuel, with the aim of increasing to 50 trucks at its Magor site later this year. With 36 billion litres of diesel consumed in the UK annually, this is a major step by Budweiser Brewing Group UK&I in tackling climate change.

“We are excited to be pioneering the use of HVO at our Magor brewery, which will result in significant reductions in CO2 emissions across our UK operations, highlighting the importance of green logistic initiatives” said Mauricio Coindreau, Director of Procurement & Sustainability, Budweiser Brewing Group UK&I. “The theme of this year’s Earth Day is investing in our planet, and as a leading brewer, we’re proud to continue investing in sustainability initiatives that also protects our planet and the people in it.’

Virginia Alzina, EV Cargo’s Chief Sustainability Officer, added that as a member of the Science Based Target Initiative and signatory to the UN Global Compact and its sustainable development goals, EV Cargo has supported many key customers in introducing sustainable initiatives to reduce carbon emissions associated with their distribution operations.

“We are proud to help Budweiser Brewing Group and AB InBev further decarbonise its supply chain as part of the net zero strategy” Ms Alzina said.

Alongside its ambitious global sustainability goals, Budweiser Brewing Group UK&I aims to brew the UK’s most sustainable beers. The company already brews every single can, bottle and keg in the UK with 100 percent renewable electricity from its own wind turbine and two solar farms. The brewer has also removed plastic rings from its entire portfolio and has met its goal of brewing with 100 percent British-grown barley, reducing carbon emissions and championing local agriculture.