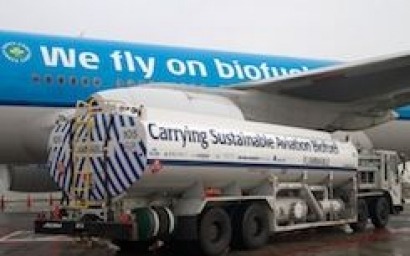 The initiative is being undertaken in partnership with Schiphol Group, Delta Air Lines and the Port Authority of New York and New Jersey, and will utilize bio-fuel derived from refuse cooking oil.

“If we want to make aviation more sustainable, we need to join forces”, said Camiel Eurlings, Managing Director KLM. “We are very pleased to be able to make a joint effort to lift this biofuel project off to great success, with support of Schiphol Group, Delta Airlines and the Port Authority of New York and New Jersey.”

“For eight years in a row, KLM, together with Air France, has been sector leader on the Dow Jones Sustainability Index. Alongside this biofuel series, we are starting a study to further identify sustainability gains in fuel, weight and carbon dioxide reduction throughout the entire flight process," Eurlings continued.

“We are striving to achieve the ‘optimal flight’ together with research institutes, suppliers, airports, and air traffic control. We are combining new and existing technology, processes, and efficiency initiatives to achieve this,” he said.

The airline noted one of its goals in undertaking the bio-fuel initiative was to increase demand for the alternative fuel and thereby ultimately drive down its cost, making it competitive with dirtier fossil fuels.

KLM said CO2 emissions from aircraft account for as much as half of all climate-threatening emissions associated with airport operations.

The first flight under the program occurred on 8 March 2013 -- a round trip between Amsterdam and the US. Over the remaining weeks of the program, one flight a week -- Flight 642 departing JFK for Schiphol will rely on cooking-oil-based bio-fuel.

“The Port Authority is pleased to partner with KLM on their pioneering series of transatlantic biofuel flights,” said Susan Baer, Aviation Director for The Port Authority of New York and New Jersey. “This program complements our agency’s efforts to reduce greenhouse gas emissions at our airports and design resilient, energy-efficient, high-performance facilities for the future.”

Jos Nijhuis, CEO of Schiphol Group, said, ”We have achieved our objective to be carbon neutral with respect to our own activities. But our responsibility does not stop at the gates of Schiphol. It is our duty as partners in the aviation industry to stir innovation and to create new solutions which will make aviation more efficient and more sustainable. That is why we support KLM in this pioneering project that will help pave the way for climate-friendly aviation, one of the strategic pillars of our corporate responsibility policy.”