Monday, 02 February 2015
0
Robin Whitlock
REG Bio-Power has formally unveiled a new 18 MW power plant in Yorkshire which will be used for converting cooking oil into 100 percent eco-friendly energy for the National Grid. 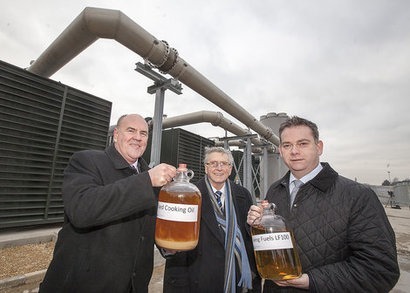 Living Fuels operates a scheme in partnership with local councils and waste contractors, including Selby District Council, by which used cooking oil can be recovered into sustainable renewable energy for the National Grid reserves. This power can be called upon by the National Grid to meet unexpected power demand at short notice.

Through schemes such as that run by Living Fuels, communities in Yorkshire will be helping the government to reach its UK targets of 80 percent carbon emission reduction by 2050.

“The new power plant will allow north Yorkshire communities to make a substantial difference in moving towards sustainable living” said Ian Collins, managing director at REG Living Fuels. “Recovering waste cooking oil to create electricity is incredibly good for the environment. Not only are our sites producing much-needed renewable energy but anyone who recycles their waste cooking oil is also helping cut the UK taxpayers’ £15 million bill for repairing drains clogged with fat caused when oil is tipped down the sink.”

Mr Collins added that waste cooking oil is a nightmare to water companies, but to Living Fuels it is an environmentally-friendly fuel. The company’s patented bioliquid LF100 has now clocked up over 90,000 hours of electricity generation across its existing engines

Communities assist the REG Living Fuels initiative by delivering used cooking oil to 500 household recycling centres across the UK. The oil is then converted into patented bio-liquid which is free from additives. The bio-liquid powers the power station allowing National Grid to support electricity supplies in times of unscheduled peak demand.

The company was established in 2007 from a small company operating in East Anglia. It has now expanded across the UK and has a head office in Nottingham. The company maintains over 450 used cooking oil tanks at household waste recycling centres, public sector establishments and food manufacturers.

REG Bio-Power is a subsidiary of Renewable Energy Generation, who specialise in the financing, construction and operation of wind farms throughout the UK. Both REG Holdings and REG Bio-Power are dedicated to reducing CO2 emissions, enabling the country to achieve its energy target of 20 percent of complete energy generation from renewable sources by 2020.

The opening launch was attended by attended by local MP Nigel Adams along with the REG Bio-Power team members.