Thursday, 03 August 2017
0
Dan McCue
Edinburgh-based Celtic Renewables Ltd. set the wheels in motion of the first car to be fueled by a whisky residue biofuel. 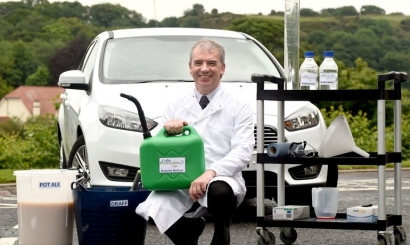 The fuel - biobutanol - is a new advanced and sustainable biofuel, which is a direct replacement for traditional fuel. It is produced from draff - the sugar-rich kernels of barley which are soaked in water to facilitate the fermentation process necessary for whisky production - and pot ale, the copper-containing yeasty liquid that is left over following distillation.

Working with Tullibardine Distillery in Perthshire, the company has developed a groundbreaking process which could potentially revolutionize the transportation industry.

Professor Martin Tangney, the company's founder and President, commented: "This is the first time in history that a car has ever been driven with a biofuel produced from whisky production residues. It is fitting to do this historic drive in Scotland, which is famous not just for its world-renowned whisky but also for being a powerhouse for renewable energy. Celtic Renewables is playing its part in sustainability by taking this initiative from a research project at Edinburgh Napier University to, what we believe will be, a multi-billion-pound global business with the opportunity to turn transport green."

With the assistance of close to $12 million of funding support from the Scottish government and other investors, the company plans to open a factory in 2018 able to produce 500,000 liters of the fuel annually.

Tullibardine distillery manager John Torrance added: "Right from the outset when Celtic Renewables approached us we could see the game-changing potential of a new fuel created from our by-products.

"We're a forward thinking distillery and we're happy to support what promises to be a groundbreaking first for renewable energy, for transport and for the Scottish whisky industry alike."