Tuesday, 30 June 2015
1
Dan McCue
United Airlines on Tuesday announced that it is buying a $30 million stake in US-based Fulcrum BioEnergy, a firm specializing in the development and commercialization of converting municipal solid waste into low-cost sustainable aviation biofuel. 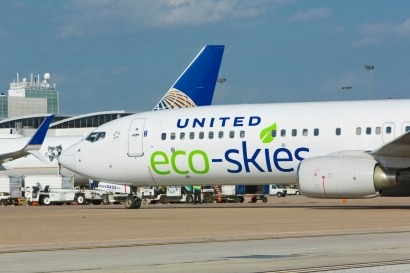 United's investment is the largest ever made by a US airline in alternative fuels.

In addition to the equity investment, United and Fulcrum have entered into an agreement that contemplates the joint development of up to five projects located near United's hubs expected to have the potential to produce up to 180 million gallons of aviation biofuel fuel per year.

United has also negotiated a long-term supply agreement with Fulcrum and, subject to availability, will have the opportunity to purchase at least 90 million gallons of sustainable aviation fuel a year for a minimum of 10 years at a cost that is competitive with conventional jet fuel.

"We know alternative fuels is an emerging industry that is vital to the future of aviation and this is just one of our initiatives to help make these fuels saleable and scalable," said Brett Hart, United's executive vice president and general counsel.

"Investing in alternative fuels is not only good for the environment, it's a smart move for our company as biofuels have the potential to hedge against future oil price volatility and carbon regulations," Hart said.

The move comes at a pivotal time for the airline industry. Earlier this month the Obama administration proposed that new limits on aviation emissions developed, and the International Civil Aviation Organization, a United Nations agency, is hoping to have a deal on reducing aviation emissions worldwide, early next year.

Fulcrum BioEnergy says its technology can reduce an airline’s carbon emissions by as much as 80 percent compared with traditional jet fuel.

In a statement, United said, "Fulcrum has successfully developed and proven its technology to convert MSW into low-cost, low-carbon transportation fuels in an innovative, clean and efficient thermochemical process. MSW is an attractive biofuel feedstock as it is low cost, has limited volatility and a virtually unlimited supply."

“United’s investment and participation in our projects is a tremendous boost to our program," said E. James Macias, Fulcrum’s president and chief executive officer.

"Their support, commitment and backing accelerate our schedule to bring large volumes of competitively-priced, sustainable fuels to United and the rest of the aviation industry,” Macias said.

United Airlines is no stranger to the biofuels market. In 2013, the airline agreed to buy 15 million gallons of biofuels over three years from a California based producer called AltAir Fuels, which makes biofuels out of agricultural waste.

“This partnership underscores United’s efforts to be a leader in alternative fuels as well as our efforts to lead commercial aviation as an environmentally responsible company,” said Angela Foster-Rice United’s managing director for environmental affairs and sustainability.

“From our carbon offset program to our fuel saving winglet technology, this investment in Fulcrum represents yet another example of our Eco-Skies commitment to a more sustainable future," she said.

Of course, United Airlines isn't alone in its pursuit of a cleaner, more sustainable future for the airline industry.

Southwest Airlines announced last year that it would purchase about three million gallons a year of jet fuel made from wood residues from Red Rock Biofuels. Also last year, British Airways joined with Solena Fuels to build a biofuel refinery near London’s Heathrow Airport, which will be completed by 2017.

Alaska Airlines aims to use biofuels at least at one of its airports by 2020.

Tags: Fuel ,Biofuel ,Bioenergy ,Waste ,Oil ,Saving ,Sustainability ,Transport ,Carbón
Add a comment
Lillie M.
That was very usefull information for me, I've ordered an essay on essay writing service, but I use some of this data to improve it.
¡Suscríbete!
biogas