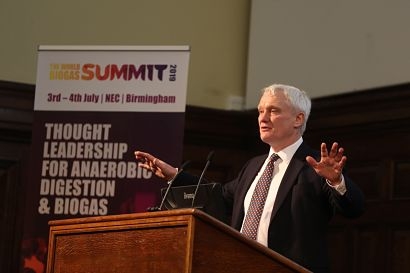 The Investment Minister made this announcement at the ADBA National Conference 2018 this morning.

“We want food waste to be collected separately for use in AD plants – to make the green biogas that can fertilise our crops and heat our homes: an environmentally sustainable option for waste management that cuts down on landfill” said Mr Stuart. “[The Resources & Waste Strategy will] tackle long-standing issues like waste crime, collection systems, packaging and plastic pollution – including requiring separate food waste collections.”

Only around a third of households in England currently have their food waste separately collected, whilst collections are universal in Scotland, Wales, and Northern Ireland. Environment Secretary Michael Gove said in October that he would “like to see” a national separate food waste collection scheme, while a coalition of over 40 trade bodies, campaign groups, businesses, and local authorities recently called on government to “fast-track” the rollout of separate food waste collections across England.

Mr Stuart described AD, which recycles inedible food waste into renewable energy and natural fertiliser, as “the best option to treat food wastes both from commercial and domestic sources”. He also spoke about the potential for the UK AD industry to export waste management services and technologies worldwide and highlighted the role of AD in decarbonising the UK’s heat system and heavy transport, in restoring soils, and in reducing methane emissions.

James Richardson, the NIC Chief Economist, said that the NIC has a “very clear position” on AD and that the technology can save local authorities money, reduce greenhouse gas emissions from food waste, reduce contamination of other recyclable materials, and provide a more environmentally friendly alternative to use of natural gas in the gas grid. He also quoted the NIC’s findings that 79 percent of people who do not currently use a food waste bin would be prepared to use one if it were provided by their local council and suggested that there is a frustration among local authorities and the public that there is currently no national standard for food waste collections.

“This is the strongest suggestion yet that the government’s long-awaited Resources & Waste Strategy will include a commitment to universal food waste collections in England, and we’re delighted that this has been announced today at our conference to the very AD plant operators who will be responsible for recycling this inedible food waste into renewable energy and natural fertiliser” said Charlotte Morton, Chief Executive of the Anaerobic Digestion & Bioresources Association (ADBA), who organised today’s conference, in response to Graham Stuart’s announcement. ““It’s an absolute no-brainer that inedible food waste should be separately collected so it doesn’t end up wasted in incinerators or landfill and so that the energy and nutrition locked up in it can be reused, reducing the UK’s need for fossil-fuel-based energy and fertiliser. A commitment by ministers to universal food waste collections will finally allow England to catch up with the rest of the UK in recycling its inedible food waste whilst importantly also reducing the amount of food wasted in the first place. It is of the utmost importance, however, that this policy commitment is backed up by meaningful funding to support local authorities that haven’t already done so to introduce separate collections, and that there are measures to support local authorities in achieving sufficiently high capture rates. We look forward to seeing the full details of the government’s plans in the strategy as soon as possible.”

The ADBA National Conference 2018 brought together those working in AD with politicians, policymakers, academics, and industry experts to discuss how the AD industry can help the UK meet a range of policy goals from tackling climate change to supporting sustainable farming and greening the gas grid. The role of AD in a changing world dominated by Brexit, climate change, and political instability was the main theme of the conference, with the event taking place in Westminster on the day that MPs were due to vote on the Prime Minister’s Brexit deal.