Friday, 28 August 2020
0
Robin Whitlock
The new Audi E-Tron ‘Sportback’ is now being sold to its first UK customers, making its UK debut as a 55 quattro with a 95kWh battery, peak electrical output of 300kW and range capability of up to 241 miles. 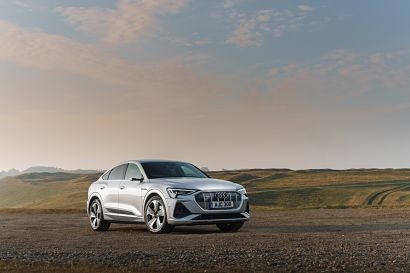 The new version of the Audi E-Tron has a coupé-inspired roofline and performance-oriented specification. The first examples to reach the UK are 55 quattro models, meaning that they combine a 95kWh battery fitted as a wide flat block beneath the passenger cell with two asynchronous electric motors – one per axle – giving a combined output of 265 kW and 561 Nm (413.8 lb-ft) of torque. In the autumn, a 50 quattro model will slot into the range below this, its two motors fed by a smaller 71kWh battery and capable of a slightly reduced 230kW output.

Locally emission-free and in virtual silence, the motors literally waste absolutely no time in launching the e-tron Sportback 55 quattro towards the horizon, taking it to 62mph in just 6.6 seconds and onward to a top speed of 124mph. However, they can do better still - by shifting the gear lever into the S position and fully depressing the accelerator pedal, the driver can access boost mode, liberating the full 300 kW of output and 664 Nm (489.7 lb-ft) of torque for eight-second phases, enough to pare back the 0-62mph acceleration time to 5.7 seconds.

“The original e-tron was cleverly conceived because it delivered transformative technology to Audi customers in a familiar, friendly form that they could easily get on board with” said Director of Audi UK Andrew Doyle. “Now the SUV has proved that electrified Audi models with all their environmental and efficiency benefits can be comfortably accommodated in everyday life in return for very little compromise versus their ICE counterparts, the time is right for the Sportback to offer a slightly bolder take on the concept.”

In most driving situations, the Audi e-tron Sportback relies exclusively on its rear electric motor in the interest of efficiency, but on occasions when driver demand exceeds its ability to supply the front unit is instantly and seamlessly activated. This also happens predictively when traction breaks in poor conditions or when sensors detect understeer or oversteer during more committed driving. The system’s continual regulation of torque distribution between both axles and its ability to act within fractions of a second replicates the familiar benefits of quattro all-wheel-drive for the age of electrification.

Fully charged e-tron Sportback models equipped to S line and Launch Edition specification are capable of a WLTP-certified range of up to 241 miles, while Vorsprung versions need replenishment after a maximum of 237 miles. The recuperation system that is standard for all models helps to make these figures as realistically achievable as possible by offering three levels of energy recuperation available both in coasting mode when the driver releases the right-hand pedal as well as during braking.

During deceleration actions of up to 0.3 g, in other words around 90 per cent of everyday driving situations, the high-voltage battery is charged by the electric motors, which act as generators in these situations. When braking from 62mph, the Audi e-tron Sportback can recuperate a maximum of 300 Nm (221.3 lb-ft) and 220 kW, which amounts to more than 70 per cent of its output. Overall, the Sportback attains up to 30 percent of its range through recuperation. The wheel brakes, whose innovative electrohydraulic activation concept allows them to respond with exceptional speed, only ever come into play when deceleration forces exceed 0.3 g.

Highly flexible thermal management, comprising four separate circuits, regulates the temperature of the high-voltage components with maximum efficiency. This enables rapid DC charging, a long battery life cycle, and reproducible performance even under heavy loads. The standard heat pump, which harnesses waste heat from the high-voltage battery, can use up to 3 kW of actual power losses for heating and air conditioning the interior—which is exceptionally efficient. Depending on the outside temperature, that can boost the Audi e-tron Sportback’s range by up to ten per cent.

When the time does eventually come to plug in, recharging of the e-tron Sportback 55 quattro can be completed to the recommended 80 per cent capacity in as little as 30 minutes at DC fast charge stations thanks to its 150kW charging capability. The same will apply to the forthcoming 50 quattro model with its 120kW threshold.

Accessing and paying for electricity while on the road is easier with the new e-tron Charging Service, which provides subscribers with one RFID payment card that is accepted at a vast number of charge points operated by 18 suppliers across the UK and Europe, and offers a choice of two attractive fixed price charging tariffs. UK fleet and retail customers who place an order for an e-tron model before December 31st 2020 will receive a free 12-month subscription to the service’s Transit Tariff and an account credit equivalent to 1,000 miles-worth of electricity at no extra cost.

Convenient AC charging at home is also possible, and Audi UK has sought to make this simpler as well by offering a 7kW home wall box charger to all fleet and retail customers placing an e-tron or e-tron Sportback order before December 31st. The wall box needs around 14 hours to restore a totally depleted 55 quattro to a full charge, or around 10.5 hours to bring the 50 quattro version back up to speed. By downloading the myAudi app, the driver can activate and deactivate charging remotely and also define a home charging schedule that takes advantage of cheaper off-peak electricity supply periods.