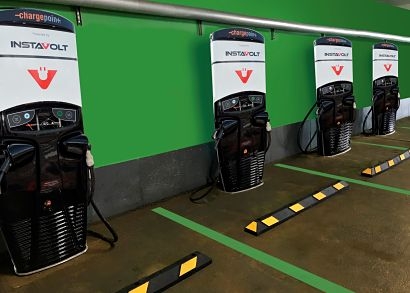 Historically, the company has installed the chargers in single units or pairs but is now ramping up the number of stations it places at selected sites to provide drivers with an even better experience. InstaVolt will continue to install its rapid chargers in pairs at many sites. However, where demand is expected to be particularly high and space permits it will install more charging stations at selected sites. Installation of six and even eight charger hubs are already underway at locations across the UK.

“The number of electric cars on the road is increasing year-on-year and that’s only going to rise further so we’re already future-proofing our offering” said InstaVolt CEO Tim Payne. “Having four chargers in one location means that even if several are in use, drivers can still access the swift and easy service InstaVolt has to offer.”

The move to install InstaVolt chargers within the car park for Merrywalks Shopping Centre forms part of a £12 million phased programme of improvements by Dransfield Properties, which owns and manages the centre.

“We know that this is something that many of our customers will welcome and we are delighted to be able to offer this new rapid charging service to our shoppers and visitors” added Dionne Moore, who is the centre manager at Merrywalks, which is rebranding as Five Valleys Shopping Centre this week. “Minimising our impact on the environment is hugely important and helping to encourage the use of electric vehicles is a really big part of that.”

The InstaVolt chargers can be found near the main entrance by Halfords. Like all of InstaVolt’s chargers, those at Merrywalks Shopping Centre are available for EV drivers to use on a pay-as-you-go basis with no subscription, card or membership needed. Drivers simply tap their contactless credit or debit card to pay.

The hassle-free approach has recently seen the firm top the user satisfaction rankings for electric car charging networks in the UK that can be used by multiple models of electric vehicle.