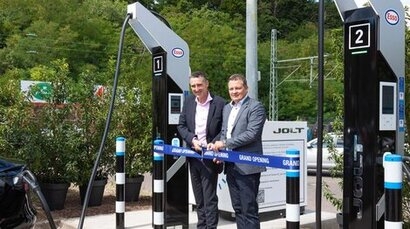 Jolt Energy and Ads-Tec Energy have announce that the introduction of their ultra-fast charging stations in major European cities and the United States is gaining momentum. The first installations at service stations in the Netherlands and Germany have already begun and distribution in the USA is in preparation.

The latest example is the opening of an ultra-fast battery-buffered charging station, a so-called ChargeBox, on 26 July at an Esso filling station in Stuttgart.

Jolt has already started to deploy the battery-buffered Ads-Tec Energy ultra-fast charging stations: They will be installed at the EG Group's Esso service stations in Munich, Berlin, Hamburg, Frankfurt, Stuttgart, Dresden, Duesseldorf and Nuremberg as well as at Tamoil stations in the Netherlands. Jolt is also cooperating with Ads-Tec Energy, the consultant Pataki-Cahill and engineering giant Aecom on the expansion in the United States. Jolt aims to install and operate up to 5,000 ultra-fast charging stations over the next 5 years.

“This partnership allows Jolt to accelerate the deployment of its charging network in cities and urban areas” said Maurice Neligan, CEO of Jolt Energy Group. “For us, speed of deployment and the flexibility to provide high quality ultra-fast charging in large population centres is key. Ads-Tec Energy’s intelligent charging and battery technology is best in class, in terms of power, quietness and charging time, as well as being supported by a highly competent team of engineers and specialists. This is a great example of two companies complimenting each other to leverage growth opportunities in an emerging and dynamic market.”