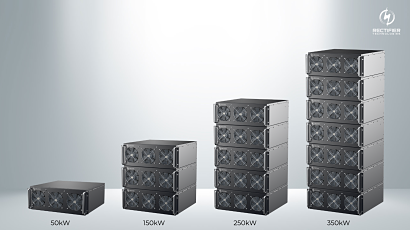 The RT22 includes features that address the common challenges faced when deploying high-powered chargers, most notably its built-in reactive power control and compliance to class B EMC. The RT22 is also ‘hot-pluggable’, allowing operators to conveniently and safely remove and install modules and avoid accidents during maintenance.

Each RT22 EV charger module is rated at 50kW and strategically sized to meet the defined power classes of DC Electric Vehicle chargers. For HPC manufacturers to create a 350kW high-powered charger, they can simply connect seven (7) RT22 modules in parallel, within the power enclosure.

At an efficiency of greater than 96 per cent, and a wide output voltage range between 50VDC to 1000VDC, the RT22 caters to battery voltages of all EVs currently available, including electric buses (around 700VDC or higher), as well as newer passenger EVs such as the Taycan from Porsche.

As High-Powered (or Ultra-Fast) DC charging networks of a similar size and power are rolled out across the world, an unprecedented strain will be placed on electricity networks as they draw large and intermittent amounts of power that can result in unwanted voltage fluctuations. Further, network operators are facing increasing difficulty installing HPCs without expensive network upgrades.

The RT22 has been built to address these issues, with its built-in reactive power control providing a new mechanism to regulate grid voltage levels. This allows reduced network costs and greater flexibility in installation locations.

The RT22 will be certified to meet Class B electromagnetic compatibility (EMC).

For charger manufacturers, having this level of compliance in their power converters ensures they have the flexibility to develop a charger from a low-EMI foundation, and provide more options for potential use cases for their charger, particularly as the market on highways becomes more crowded.

For instance, HPCs are largely confined to highways, where it makes sense to have them as heavy vehicles such as truck drivers and even drivers of standard vehicles travelling long distances need a quick charge on a highway. But as heavy vehicles become more commonplace and drivers want ultra-fast charging within cities, there is likely to be a concurrent increase in the need for HPCs within urban centres.

“We have put in the time to understand the pain points of HPC manufacturers and engineered a product that addresses as many of those issues as possible” said Nicholas Yeoh, Director of Sales, Rectifier Technologies. “Not only is the RT22 priced competitively, but features were also included to reduce overall costs of high-powered charger deployments. As electric vehicle adoption continues to increase and battery technologies improve, the demand for HPCs will consequently rise as they play a key role in the facilitation of long-distance travel,” said Yeoh. “The most powerful HPCs today sit at around 350kW, but higher capacities are being discussed and engineered to prepare for the electrification of heavier vehicles, such as freight trucks. With Class B EMC compliance, the RT22 can start from a lower noise foundation and thus be more suitable to being installed within an urban environment where electromagnetic interference (EMI) must be limited. While the RT22 alone does not ensure the entire HPC will be Class B compliant – as there are many other factors beyond power supply that affect EMC – it makes sense to offer it at the power convertor level first and foremost. With a compliant power converter, it is more possible to create a compliant charger. From the RT22, HPC manufacturers have the foundational piece of equipment required for charger manufacturers to potentially engineer a HPC suitable for urban areas.”

Pre-production units are expected to be ready in Q3 2021.