Monday, 10 June 2019
0
Robin Whitlock
The long-awaited Tesla Model 3 has arrived in the UK and immediately become the most popular electric vehicle to lease in May, according to the latest Leasing.com League Tables. 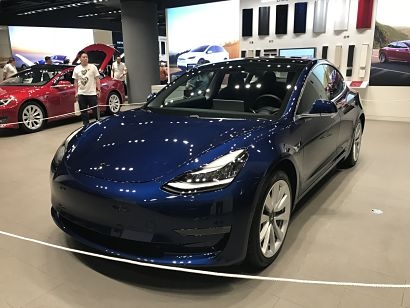 The Tesla Model 3 has outshone other popular new electric models such as the Audi e-tron and Jaguar I-Pace during May in the UK, generating more personal lease enquiries within seven days than its premium rivals managed to achieve during the entire month.

Interest in the Model 3, I-Pace and e-tron has seen EV enquiries increase 30 percent year on year during the first five months of 2019 (January to May).

“The Model 3’s popularity is down to several factors, with cost being one of them” said Paul Harrison, Head of Strategic Partnerships at Leasing.com, commenting on the figures. “Monthly prices for the Model 3 start at around £400 per month, which is almost half the cost of Tesla’s larger models. It also undercuts comparable EVs such as the Audi e-tron and Jaguar I-Pace. Obviously the UK is one of the last countries to get the Model 3, and the long waiting period for right-hand drive models no doubt contributed to this huge early surge in interest too. It’s early days yet, but if the Model 3’s popularity continues at a comparable pace over the next few months, then Tesla could have delivered its first mass-market electric car. This is a strong sign that lots of consumers are ready to make the jump to next-generation vehicles and leasing is offering them the ideal opportunity to test the waters.”

Elsewhere on the Leasing.com League Table, the Mercedes-Benz A-Class remains in pole position as the most popular personal lease car, while keen pricing of the E-Class saloon pushed the VW Golf into third position.

The all-new Range Rover Evoque jumped from eighth position to fourth, but Mercedes is still the most sought-after manufacturer among personal lease customers.

Top 10 electric and hybrid car enquiries for May:

Top 10 personal lease enquiries for May: