Tuesday, 15 May 2018
1
Robin Whitlock
UPS has announced it is working with technology firm Arrival to supply 35 modular, light-weight EVs with zero tailpipe emissions, 150-mile battery range and advanced safety features which will be trialled in Paris and London. 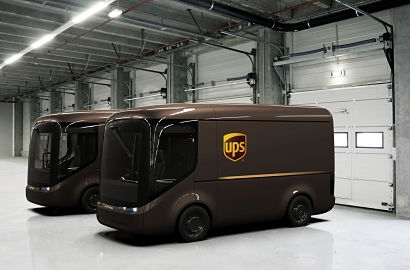 The pilot fleet will consist of 35 electric delivery vehicles (EVs) with zero emissions. The lightweight composite vehicles will have a battery range of more than 150 miles (240 kilometres), which is significantly higher than other EVs currently in service. They will also come equipped with Advanced Driver Assistance Systems (ADAS) that help to improve safety and reduce driver fatigue. These features, combined with a highly advanced vehicle display provide the driver with an intelligent and connected vehicle.

“UPS is working with Arrival here in the UK because their smart electric vehicles are helping to reduce dependency on fossil fuel” said Luke Wake, international director for automotive engineering in the advanced technology group at UPS. “This is a pioneering collaboration that helps UPS develop new ways to reduce our emissions. UPS is marshalling its global scale to encourage innovation within the automotive industry. We are helping to drive demand for these disruptive technologies. The result is a safer and cleaner fleet for the communities in which we deliver.”

Denis Sverdlov, CEO of Arrival, added that the new vehicle will have a much wider field of view with a unique wrap-around front window that improves not only the safety of the driver but also that of cyclists and pedestrians.

Arrival is the first commercial vehicle manufacturer in Europe to provide purpose-built electric delivery vehicles to UPS’s specifications. Since 2016, UPS and Arrival have been developing prototypes of different sizes, and the first vehicles are expected to be deployed on the road before the end of this year. UPS are now considering electromobility and alternative technology vehicles as a priority. The company currently has more than 9,000 vehicles worldwide using alternative propulsion methods, giving UPS one of the largest private and most diverse alternative fuel and advanced technology fleets in the entire logistics industry.

Last month UPS announced that it had installed a radical new charging technology at its central London depot in Camden that overcomes the challenge of simultaneously recharging an entire fleet of EVs without the need for an expensive upgrade to the power supply grid. The company has a long history with electric vehicles, having first introduced them into its fleet in the U.S. in the 1930s, and reintroduced modern EVs in 2001. It has more than 300 electric vehicles deployed in Europe and the U.S., and nearly 700 hybrid electric vehicles.

Recently, UPS announced plans to deploy 50 plug-in electric delivery trucks that will be comparable in acquisition cost to conventional-fuelled trucks – an industry first that is breaking a key barrier to large-scale fleet adoption. The company is collaborating with Workhorse Group, Inc. to design the vehicles from the ground up, with zero tailpipe emissions.

In December 2017, UPS ordered 125 new fully-electric semi-tractors to be built by Tesla in 2019, the largest pre-order to date. Additionally, last September, UPS announced it will become the first commercial customer in the U.S. to start using three medium-duty electric trucks from Daimler Trucks Fuso brand, called the eCanter.