Tuesday, 29 March 2022
0
Robin Whitlock
Volkswagen Group and SEAT are planning to electrify Spain by creating a European Electric Vehicle Hub and building up a battery cell production facility and full, sustainable E-ecosystem. The Volkswagen Group announced its plan to apply to the Electric Vehicle PERTE programme after the Spanish government announced its intention to open the call for applications on April 1st, 2022. 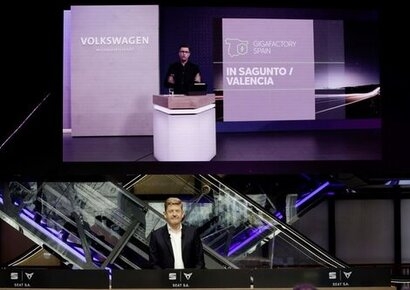 The ‘Future Fast Forward’ programme would include a total investment of more than 7 billion euros together with external suppliers along the entire value chain of e-mobility. Volkswagen also announced Valencia as the dedicated location for a new battery cell factory in Spain. All plans are still subject to final approvals, particularly the PERTE submission.

“This project is highly important – for Volkswagen, for Spain, and for the whole of Europe” said Thomas Schmall, member of the Volkswagen AG Board of Management responsible for Technology and chairman of the SEAT S.A. Board of Directors. “It’s our ambition to electrify Spain and we are willing to invest more than seven billion euro together with external suppliers for the electrification of our Martorell and Pamplona plants and the localisation of the battery value chain in Valencia.”

Wayne Griffith, president of SEAT, added that Future Fast Forward has the potential to transform the Spanish automotive industry and democratise electric mobility across Europe and that the more than 7 billion euros Volkswagen Group and SEAT S.A. would mobilise for Future: Fast Forward would represent the largest industrial investment in Spanish history.

Gigafactory Valencia would be Volkswagen’s second location after Salzgitter and the first one outside of Germany.

The selection process was tough and Valencia emerged as the strongest location based on more than 100 criteria such as qualified workforce, public support, good logistic connections and green energy. Volkswagen aims for a production capacity of 40 GWh annually and plans to employ more than 3,000 people in Valencia. The timeline is tight: To be ready to start production in 2026, construction of the plant should begin by the end of the year. The first milestone must be the positive outcome of the PERTE submission and finalised permits.

In total, Volkswagen plans to build six Gigafactories in Europe with an annual capacity of 240 GWh together with partners. The group’s demand for premium cells will be met by Northvolt in Skellefteå, Sweden. To speed up the roll-out of all further cell factories coming up for Europe, Volkswagen has founded a European corporation for cell development and manufacturing and keeps the option open to integrate partners or investors. Its centre of gravity – and a blueprint for all following plants – will be the Salzgitter plant in Germany starting production in 2025.