Wednesday, 09 October 2019
0
Robin Whitlock
The World’s first fully electric touring car – the Seat Cupra e-Racer – has been put through its paces on the track for the first time by official Cupra driver, Mattias Ekström. 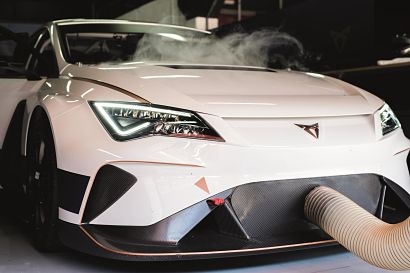 The 670 hp electric racer is set to compete in a new ETCR race series in 2020 and has now completed its first full-speed laps around the Montmeló Circuit in Barcelona. It has a top speed of 167 mph and is capable of reaching 62 mph in just 3.2 seconds. Aside from its 400 kg battery pack, the e-Racer resembles existing touring car race vehicles, but with more power delivered in near silence.

Driver Mattias Ekström has more than 25 years experience in different touring car, rally and karting competitions and so is one of the most versatile race car drivers in the world. He is working closely with the team of engineers and technicians to fine-tune the fully electric race car and compete in the new ETCR race format in 2020.

“What I'm really looking forward to is being able to control and harness all the car's power” said Mr Ekström. “I think the biggest challenge is getting used to driving with no gearbox and without the roar of the engine as a reference for knowing, for example, how fast to go when taking curves. I still need some time to get used to the sound of the engine; it's much quieter than any other I've driven before, and I'm a very emotional driver. In addition, I have to pay close attention to energy management in each lap; that's essential with an electric race car, almost as important as its speed. I hope to be able to help the Cupra team with my experience and the feedback from the car's steering wheel to make it faster, but at the same time more consistent and easy to drive. Once we begin competing with the Cupra e-Racer, we have to keep our eyes on the victory and to do that we must be well prepared.”