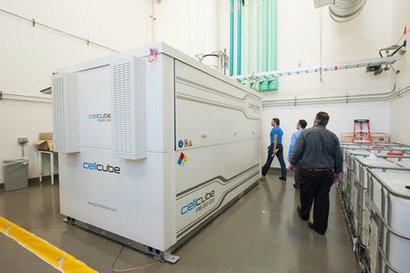 Energy storage technologies are expected to increase at an exponential rate in Canada and abroad over the next decade as nations all over the world attempt to develop greener, more efficient national grids. Alongside increased demand for graphite, nickel, and lithium used in lithium-ion batteries, there is a growing demand for vanadium for use in vanadium redox flow batteries (VRFB), a promising technology choice for stationary energy storage.

Vanadium is a grey ductile metal, but does not occur naturally in forms usable in a VRFB. Rather, it is mined in combination with other compounds that must be extracted and processed to achieve sufficient purity for these applications. The purification process ultimately produces vanadium pentoxide (V2O5). This is sourced in three main ways, via co-production from steel production derived from iron ore mining, primary production from mined ore and secondary production from catalysts, ash and residues.

After V2O5 is produced, it is primarily used in the steel industry for the production of high strength low alloy, full alloy, and carbon steels. But an emerging market opportunity is rapidly developing for V2O5 to be used as the main ingredient in VRFB electrolyte and other vanadium redox battery (VRB) technologies, such as lithium-vanadium phosphate batteries.

VRFBs have emerged as a promising solution for grid services because of their long lifecycle potential and high energy capacity, which can provide extended discharge times. Additionally, given the ability to scale power and energy of a system independently, VRFB technology may be a long-term solution for off-grid power systems and micro-grids. In particular, these systems could be used to support residential, community, military, and commercial end-users, and to fulfil remote-energy-access needs of rural areas in developing countries.

Estimates on vanadium requirements for VRFB vary among producers, with an average of approximately 8 Kg of high purity V2O5 per KWh. Currently, there are few vanadium producers able to produce high purity V2O5 and products show significant differences in purity and trace element levels.

High-performance VRFBs require high quality V2O5; vanadium electrolyte must be at least 99.5 percent pure. High-purity V2O5 production can be costly if the mined ore or secondary sources used require extra processing to achieve this level of quality. In fact, the cost of vanadium contained in the electrolyte amounts to 42 percent of the overall VRFB cost. Reducing electrolyte costs by 55 percent is needed to reduce the cost of VRFBs to make this technology competitive in grid-level energy storage applications.

Given cost and quality considerations, vanadium used in VRFBs is about 1 percent of total current demand; however, demand could increase significantly over the next several years if supply chain and cost challenges are addressed. Considering the potential size of the grid energy storage market, even a slight increase in VRFB demand would mean significant growth in V2O5 consumption for this end-user product. For example, it is estimated that the vanadium consumption in the battery energy storage industry could rise 3100 percent by 2025, to 31 kt V.

Canada is not currently a primary producer of V2O5 and only 1.3 kilotons of vanadium (kt V) was produced in Canada in 2014 from secondary sources. However, primary production options are in development and untapped secondary sources may produce relatively low-cost, high-quality V2O5 for electrolytes in VRFBs and VRB technologies.

Given the opportunity for growth, NRC is working on a vanadium market assessment report exploring Canada’s role as a potential producer and supplier of high purity V2O5 for North America. NRC will be present at the Québec Mines 2016 conference on November 21-24, in Québec City where leading NRC researchers will provide an overview of preliminary findings on this topic, and a review of VRFB technology.