Wednesday, 09 November 2016
0
Robin Whitlock
Gamesa has achieved a new milestone in the development of its offgrid technology with the installation and start-up of a lithium battery storage system. 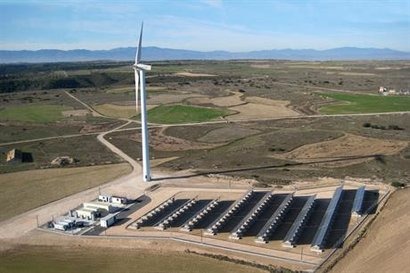 Gamesa's offgrid system, inaugurated last May at La Muela, Spain, enables power supply to regions without grid access. The prototype is pioneering on account of its bundling of four sources of power - wind power, solar power, diesel-powered generation and the recently-installed energy storage battery - into a solution with installed capacity of over 2 MW.

The prototype also includes control software custom-developed by Gamesa to facilitate integration of the four technologies. This system, known as Hybrid Power Controller (HPC), enables the remote management of all kinds of situations, including charging the batteries up and down, the start-up and stoppage of the various systems and activation of special operating modes such as the 'zero diesel' mode.

The lithium battery, with the ability to store 429 kW of power, is incremental to the Gamesa G52 turbine (with a unit capacity of 850 kW), 816 photovoltaic modules (245 kWp) and three 222-kW diesel generators (666 kW). So equipped, this prototype can generate enough power to cater to the energy needs of 4,000 households.

“The start-up of the lithium battery is an important step in the development of Gamesa's offgrid proposition” said David Mesonero. “Gamesa's Managing Director of Corporate Development. The production of power by combining these four sources will bring down the cost of electricity in remote locations without grid access, as well as generating cleaner energy.”

This offgrid prototype is the first to market to enable the ad-hoc combination of each of the technologies installed depending on specific project requirements, with the ultimate goal of generating offgrid power that minimises diesel consumption.

This foray into the offgrid segment falls under the scope of the company's strategic interest, as expressed in its 2015-2017 Business Plan, in exploring business opportunities which complement its traditional wind business - such as solar and offgrid power - and present the potential to add value from 2018. Note that the company has some prior experience in this segment: back in 2007, it installed a facility in the Galapagos Islands (Ecuador) which combines three diesel generators and three wind turbines.