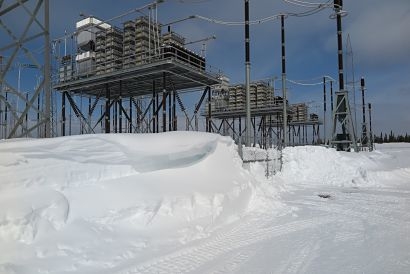 The electrical power transmission system serving much of eastern Canada and northern New England poses unique challenges to the region’s utilities. Much of eastern Canada’s transmission infrastructure is in remote locations, some of which are completely inaccessible except by rail or air. Hydro Quebec’s Montagnais site is one such facility. GE’s FSC technology installed at the Montagnais substation will maintain power transfer capacity, load division, and system stability.

FSC systems make transmission lines function as if they were physically shorter, which helps utilities move power across great distances in a more efficient manner. As utilities recognise this value, an increasing number of them are upgrading their systems to GE’s FSC technology.

GE technicians and engineers faced the challenge of fitting GE’s industry-leading FSC technology into a system originally designed by another company. Using an existing protection apparatus from the original project, GE brought three 765kV FSC banks online at the Hydro Quebec Montagnais site before the end of 2018.

“Utilities around the world are continuously looking for ways to improve capacity and efficiency while also keeping up with the challenges of modern transmission systems” said John Kern, Global Operations Manager for GE’s Grid Solutions Fixed Series Compensation Solutions. “The HQ Montagnais FSC upgrade is yet another successful example of GE’s innovative grid solutions technology”.

FSC technology is advancing, and GE has provided over 40,000 Mvars of series compensation systems for electrical utilities in the past six years alone. By capturing the competitive advantages of GE’s cutting-edge grid protection and control technologies, utilities around the world are improving service while bolstering their bottom lines.