Tuesday, 01 May 2018
0
Dan McCue
Researchers at Stanford University in California have developed a water-based battery that has the potential to provide a cheap way to store wind and solar energy. 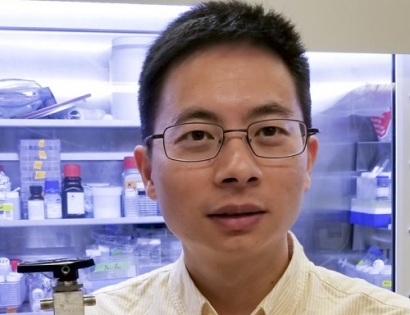 The prototype manganese-hydrogen battery, reported on in Nature Energy, stands just three inches tall and generates a mere 20 milliwatt hours of electricity, which is on par with the energy levels of LED flashlights that hang on a key ring. Despite the prototype’s diminutive output, the researchers are confident they can scale up this table-top technology to an industrial-grade system that could charge and recharge up to 10,000 times, creating a grid-scale battery with a useful lifespan well in excess of a decade.

Yi Cui, a professor of materials science at Stanford and senior author on the paper, said, “What we’ve done is thrown a special salt into water, dropped in an electrode, and created a reversible chemical reaction that stores electrons in the form of hydrogen gas.”

The team, led by Wei Chen, a postdoctoral scholar in Cui’s lab, essentially coaxed a reversible electron-exchange between water and manganese sulfate, a cheap, abundant industrial salt used to make dry cell batteries and other products.

To mimic how a wind or solar source might feed power into the battery the researchers attached a power source to the prototype. The electrons flowing in reacted with the manganese sulfate leaving particles of manganese dioxide clinging to the electrodes. Excess electrons bubbled off as hydrogen gas storing that energy for future use. Engineers know how to re-create electricity from the energy stored in hydrogen gas so the important next step was to prove that the water-based battery can be recharged.

They did this by re-attaching their power source to the depleted prototype, this time with the goal of inducing the manganese dioxide particles clinging to the electrode to combine with water, replenishing the manganese sulfate salt. Once this salt was restored, incoming electrons became surplus, and excess power could bubble off as hydrogen gas, in a process that can be repeated again and again and again.

Cui estimated that, given the water-based battery’s expected lifespan, it would cost a penny to store enough electricity to power a 100-watt lightbulb for twelve hours.

Cui said there are several types of rechargeable battery technologies on the market, but it isn’t clear which approaches will meet DOE requirements and prove their practicality to the utilities, regulators and other stakeholders who maintain the nation’s electrical grid.

For instance, Cui said rechargeable lithium ion batteries, which store the small amounts of energy needed to run phones and laptops, are based on rare materials and are thus too pricey to store power for a neighborhood or city. Cui said grid-scale storage requires a low-cost, high-capacity, rechargeable battery. The manganese-hydrogen process seems promising.

“The breakthrough we report in Nature Energy has the potential to meet DOE’s grid-scale criteria,” Chen said.

The prototype needs development work to prove itself. For one thing it uses platinum as a catalyst to spur the crucial chemical reactions at the electrode that make the recharge process efficient, and the cost of that component would be prohibitive for large-scale deployment. But Chen said the team is already working on cheaper ways to coax the manganese sulfate and water to perform the reversible electron exchange. “We have identified catalysts that could bring us below the $100-per-kilowatt-hour DOE target,” he said.

The researchers reported doing 10,000 recharges of the prototypes, which is twice the DOE requirements, but said it will be necessary to test the manganese-hydrogen battery under actual electric grid storage conditions in order to truly assess its lifetime performance and cost.

Cui said he has sought to patent the process through the Stanford Office of Technology Licensing and plans to form a company to commercialize the system.

Yi Cui is also a professor in the Photon Science Directorate at SLAC National Accelerator Laboratory, a senior fellow of the Precourt Institute for Energy, and a member of Stanford Bio-X and the Stanford Neurosciences Institute. Additional co-authors include Guodong Li, a visiting scholar in materials science and engineering who is now with the Chinese Academy of Sciences; postdoctoral scholars Hongxia Wang, Jiayu Wan, Lei Liao, Guangxu Chen and Jiangyan Wang; visiting scholar Hao Zhang; and graduate students Zheng Liang, Yuzhang Li and Allen Pei.

This work was funded by the Department of Energy

Photo: Postdoctoral scholar Wei Chen holds a prototype of what could one day be a ginormous battery designed to store solar and wind energy thanks to a water-based chemical reaction developed in the lab of Stanford materials scientist Yi Cui. (Image credit: Jinwei Xu)