Geothermal can supply 7% of California’s power

Friday, 27 May 2011
0
Small, geographically dispersed geothermal power plants could provide 7% of California's electricity supply, according to an analysis of data collected by a consultant to the Golden state. But what feed-in tariff would enable this target to be realised? 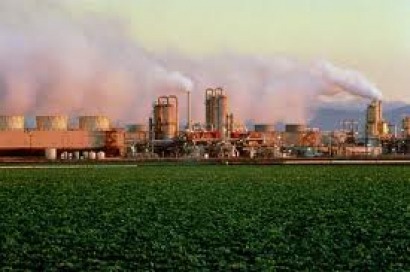 Geothermal energy is a renewable resource using the heat of the earth to generate electricity and heat homes, offices, and factories.

California leads the world in geothermal energy development. However, most of California's geothermal power plants were built in the 1970s and 1980s. There has been very little geothermal development in the state since Jerry Brown was last Governor in the early 1980s.

That could change. Candidate Brown prominently talked of introducing a system of feed-in tariffs to spur renewable energy development in California. Brown specifically mentioned developing as much as 12,000 MW of new renewable generating capacity with feed-in tariffs.

In a study for the California Energy Commission (CEC) in 2008, engineering consultant Black & Veatch examined the renewable resources available to meet California's renewable energy target and the new transmission capacity that would be needed. Included in the consultant's report, Renewable Energy Transmission Initiative (RETI), are detailed estimates of the cost to develop 244 proposed geothermal power plants at sites in California, Nevada, Oregon, Idaho and British Columbia. Black & Veatch considered projects as small as 8 MW to as large as 1,000 MW.

While many geothermal projects are connected at transmission voltages, they differ from typical central-station plants. Many individual geothermal projects are relatively small. Of the 244 proposed projects in the RETI database, 185 or three-fourths are less than 20 MW in size. They would, thus, qualify as distributed generation under Governor Jerry Brown's proposed feed-in tariff.

The following analysis arbitrarily sorted the proposed projects into several size categories similar to those found where feed-in tariffs are used to develop geothermal energy.

The bulk of the projects greater than 20 MW are also relatively small. Forty projects, or 16%, fall in the size range from 20 MW to 50 MW. Altogether, 90% of the proposed geothermal projects in the RETI data base are less than 50 MW in size. This is in part artificial and due to state regulations. Power plants less than 50 MW are not regulated by the CEC.

What geothermal tariffs are needed?

This analysis considered only IPPs and for only two conditions: without federal subsidies and with the ITC, a federal tax subsidy.

While federal investment subsidies currently exist in the form of the PTC and ITC for many renewable energy technologies, their future is uncertain. The federal government's growing budget deficit, the cost-cutting mood of Congress, and threats to the bond rating on US federal debt suggests that tax subsidies may not be a secure source of funding. Because geothermal projects take several years to complete, investors are wary of financing projects when the future of tax credits or other "incentives" is questionable.

Geothermal feed-in tariffs worldwide vary from as low as $0.10/kWh for a 20-year contract in Spain to as much $0.40/kWh for a 20-year contract in Switzerland. Black & Veatch did not specifically evaluate the feed-in tariffs that would be necessary to fully pay for geothermal generation plus sufficient profit to overcome the risk of developing what is inherently a risky resource.

Feed-in tariffs are typically determined on the cost of generation plus a reasonable profit. Cost of energy studies--because of their different objectives--do not necessary reach the same conclusions about price. However, Black & Veatch's study is the most detailed source of data in the public domain on geothermal energy and its cost and the study can serve as a proxy for what geothermal tariffs may work in the California context.

For IPP projects without access to federal subsidies, tariffs for geothermal projects less than 20 MW in California would need to be comparable to those in Europe: from a low of $0.13/kWh to as much as $0.30/kWh. Tariffs for projects from 20 MW to 50 MW would vary from a low of $0.10/kWh to a high of $0.18/kWh. 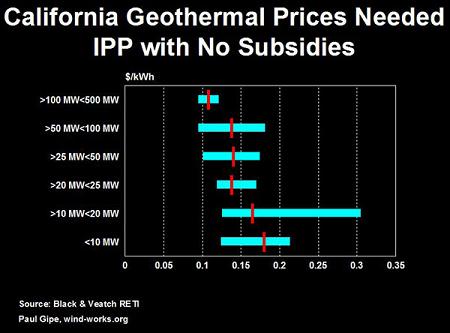 Projects that could be developed quickly and take advantage of the federal ITC while it remains available would be significantly less expensive. For projects less than 20 MW, tariffs would vary from a low of about $0.09/kWh to a high of $0.20/kWh. Projects from 20 MW to 50 MW in size would require tariffs in the range from a low of $0.08/kWh to $0.13/kWh . 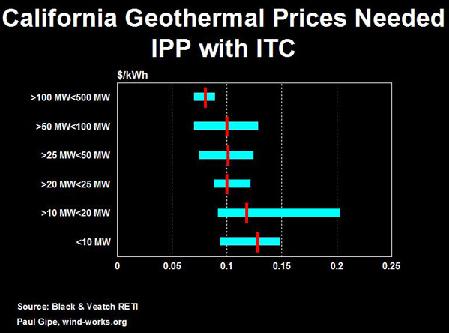 The price necessary for geothermal development in California is comparable to that of other renewable resources. Estimates of the cost of geothermal are comparable to those of wind energy, but geothermal costs less than that for generation from solar photovoltaics.

In contrast to variable renewable resources like wind and solar, geothermal provides base load generation. It is thus a natural compliment to the development of California's abundant wind and solar resources.

California could add 7% of new renewable generation to its supply, and compliment development of its variable renewable resources by including geothermal energy in Governor Brown's as yet unannounced feed-in tariff policy.

Editor’s note: This feed-in tariff article was kindly provided by Paul Gipe and is partially supported by An Environmental Trust and David Blittersdorf in cooperation with the Institute for Local Self-Reliance. It is the first in a series of upcoming articles on geothermal energy and feed-in tariffs. The views expressed are those of Paul Gipe and are not necessarily those of the sponsors.