Saturday, 29 July 2017
0
Dan McCue
Google announced through a blog post that it has has set up a new, independent business, called Dandelion to promote new geothermal system technology. 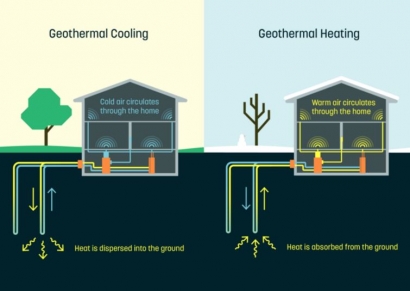 “For the past few years, my team and I have been on a mission to make it easier and more affordable to heat and cool homes with the clean, free, abundant, and renewable energy source right under our feet: geothermal energy,” Dandelion CEO Kathy Hannun wrote in the blog post.

Currently, residences and commercial buildings account for just under 40 percent of all carbon emissions in the US, mostly in the Northeast where fuel oil and propane are the primary sources of heat for many homes in the fall and winter.

But not only is the use of these fossil fuels detrimental to the environment, their use is also subject to price variability which can wreak havoc on family and business budgets.

“Home geothermal systems can offer lower and steadier monthly energy costs because they use the energy in the ground under your yard,” Hannun said. “The ground stays at about 50 degrees Fahrenheit year-round.

"In the wintertime, water circulating through U-shaped plastic pipes installed in your yard absorbs heat from the earth, and then a geothermal heat pump inside of your home turns it into warm air. In the summertime, the pump draws the warm air out of your home and the so-called ‘ground loops’ disperse the heat into the earth,” Hannon said.

Dandelion is based on new technology that makes it easier, from a technical and financial standpoint, to tap into the power of the Earth.

“We began prototyping and testing all sorts of ideas, like modifying a jackhammer that could burrow itself into the ground; freezing the ground with liquid nitrogen and chipping the soil away with a hammer; and even using a high pressure water jet to obliterate the ground at rocket speeds. After months of testing, we hit upon a design for a fast, slender drill that hit our objectives,” Hannon said.

“It could drill just one or two deep holes just a few inches wide, and compared to typical installation rigs, it produced less waste and took up much less space as it operated. It left a typical suburban backyard relatively undisturbed, so we could minimize landscaping costs for homeowners. Just as importantly, it was fast; we could install all the ground loops in less than a day, instead of the more typical 3 or 4 days,” she added.

Dandelion has already begun operations in New York and will concentrate on other areas in the Northeast before spreading its efforts nationwide.

“We’re looking to partner with local heating and cooling installers," Hannon said. A"nd we’ve developed a financing program that will allow homeowners to install a Dandelion system for no money down and save money from day one while locking in low, predictable payments for heating and cooling.”