Norfolk green energy solution to be highlighted in Westminster 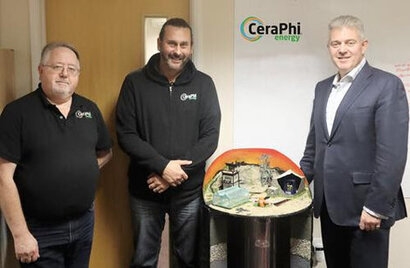 “The concept and potential of geothermal energy is exciting and look forward to highlighting them to my ministerial colleagues” Mr Lewis said, after meeting the Great Yarmouth-based team.

CeraPhi Energy announced yesterday (Thursday 16th December) that it has entered into a Heads of Terms Agreement with UK Oil & Gas (UKOG) to develop the deep geothermal GeoHub at UKOG’s Horse Hill site in Surrey. It is also working with Third Energy and IGas on UK projects as well as internationally.

“The support of senior ministers is essential to help gain the appropriate recognition by the Government for this new approach to solving the global problem we are all facing” Mr Williams said. “Much as how offshore wind became established, the huge potential of deep geothermal needs similar recognition to bring this much needed clean and almost everlasting energy source to market and help achieve the challenging Net Zero targets. Here at the CeraPhi team, we are working hard to bring the first projects to fruition and to demonstrate that our approach to this, works. Supporters and backers from around the world are working with us to make this happen, and when it does, we will create work and jobs for the region and elsewhere.”

CeraPhi, which has offices in London, Houston and Cornwall, started last year with founders bringing decades of global oil and gas experience to a new approach to renewable energy.

Mr Lewis returned to Westminster with an extensive report about the benefits and opportunities of deep geothermal and a ministerial briefing by CeraPhi and the Geothermal Energy Advancement Association (GEAA).