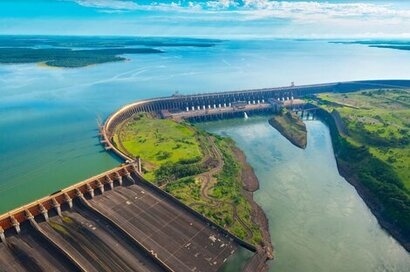 Atome Energy is currently engaged in developing large scale industrial projects concentrating on energy and food security as well as hydrogen mobility projects. The company, through its Paraguayan subsidiary, Atome Paraguay S.A., has entered into the freehold purchase contract to acquire a 75 acre site adjacent to the Villeta substation for its Villeta production facility from an unrelated local landowner. Completion is expected in in four months at a price of $900,000.

The Villeta facility is the first phase of what is ultimately projected to be a total of some 400 MW of capacity in Paraguay. The large 75 acre site will provide room for expansion and facilitate the ability as may be required to store and act as a delivery point for Atome’s Paraguay production.

Not only is the site adjacent to the Villeta substation of Ande, the national power distribution company, thereby minimising the cost of transmission lines, it is conveniently situated near the major Villeta port facilities on the River Paraguay, itself only 35 kilometres from the capital Asuncion. The navigable Paraguay River merges further downstream with the Parana River and thence through the River Plate to the Atlantic Ocean. It is accordingly an important waterway linking inland cities in Paraguay such as Villeta to international export markets and provides Atome with its route to export markets as it expands production.

The site is close to major fertiliser distribution companies who currently import all ingredients for the products they sell from outside of Paraguay and transported up the river from countries such as China and Russia. The site is also near barge building companies contributing to Paraguay's third largest barge fleet in the world.

The Government of Paraguay in association with the multilateral institution, the Inter-American Development Bank (IDB) is hosting an international “Invest in Paraguay” event on 8-9 September 2022 in Asuncion, the capital of Paraguay, at the headquarters of the South American Football Federation.

Peter Levine, Chair of Atome, has been invited to speak at the event alongside, amongst others, the President of Ande and the Paraguayan General Director of Itaipu Binacional, the second largest-hydroelectric dam in the world, a position that James Spalding, now President of Atome Paraguay and main board director of Atome, held for five years between 2013-2018.

“As we continue to make progress, the acquisition of the Villeta site is the next step on our critical path to achieve Atome’s business plan and vision to fast-track our projects by locating near the source of power” said Olivier Mussat, CEO of Atome. “Accordingly, we were very pleased to come to an agreement to secure freehold land adjacent to Ande’s substation, near potential end customers and export facilities. The large 75 acre footprint not only enables Atome to have room for future expansion and facilitation of storage but it also gives Atome the scale to grow its business footprint and attract associated industries and provide new sustainable jobs. This is a great opportunity to bring in third party complimentary businesses in the energy and fertiliser value chains, creating wealth for the country and value for our shareholders.”