Wednesday, 18 August 2021
0
Robin Whitlock
The BMW Group is systematically pushing forward with development of hydrogen fuel cell technology as an additional option for sustainable individual mobility and is to present the BMW iX5 Hydrogen at the IAA Mobility 2021 in Munich. 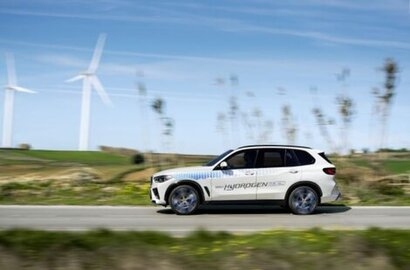 Currently still in series development, the Sports Activity Vehicle (SAV) with hydrogen fuel cell drive train will be one of several vehicles visitors can experience as they are driven along the Blue Lane connecting the main exhibition grounds with other exhibition venues in the city centre.

A small series of the BMW iX5 Hydrogen, developed on the basis of the BMW X5, will be used for demonstration and testing purposes from the end of next year.

With the right conditions, hydrogen fuel cell technology has the potential to become a further pillar in the BMW Group’s drive train portfolio for local CO2-free mobility. The BMW i brand, which is entirely geared towards locally emission-free mobility, could in the future also offer vehicles with hydrogen fuel cell drive trains, in addition to battery-electric models such as the BMW i3, BMW iX3, BMW iX and BMW i4. Provided the hydrogen is produced using renewable energy and the necessary infrastructure is available, this technology can complement the BMW Group’s electrified drive train portfolio – and, in particular, meet the needs of customers who do not have their own access to electric charging infrastructure, frequently drive long distances or desire a high degree of flexibility.

The BMW iX5 Hydrogen combines fuel cell technology with a fifth-generation BMW eDrive. The drive system uses hydrogen as fuel by converting it into electricity in a fuel cell – delivering an electrical output of up to 125 kW/170 hp, with water vapour as the only emission. This drive power also enables it to maintain consistently high speeds over longer distances. The electric motor was developed from the fifth-generation BMW eDrive technology also used in the BMW iX. In coasting overrun and braking phases, it serves as a generator, feeding energy into a power battery. The energy stored in this power battery is also utilised for particularly sporty driving manoeuvres – delivering a system output of 275 kW/374 hp and guaranteeing the brand's signature driving experience.

The hydrogen needed to supply the fuel cell is stored in two 700-bar tanks made of carbon-fibre reinforced plastic (CFRP), which together hold almost six kilograms of hydrogen.

“With its high-performance fuel cell and optimised power battery, the BMW iX5 Hydrogen’s drive system is unique in the world” said Juergen Guldner, head of BMW Group Hydrogen Fuel Cell Technology and Vehicle Projects. “With this, we are forging new paths for sustainable driving pleasure. Filling up the hydrogen tanks only takes three to four minutes – so there are no limits on using the BMW iX5 Hydrogen for long distances, with just a few, short stops in-between”

According to a report by the International Energy Agency (IEA), hydrogen offers considerable potential as a future energy source in connection with global energy transition activities. Thanks to its storage and transport capabilities, hydrogen can be used for a wide variety of applications. Most industrialised countries are therefore adopting hydrogen strategies and backing them up with roadmaps and concrete projects. In the transport sector, hydrogen can become a further technology option, alongside battery-electric mobility, for shaping sustainable individual mobility in the long term. However, this will depend on competitive production of sufficient quantities of hydrogen from green power, as well as expansion of the corresponding filling infrastructure, which is already being intensively pursued in many countries.

The BMW Group welcomes and supports activities to promote innovation in Germany and Europe that will help build a hydrogen economy and accelerate production of green hydrogen. These specifically include the large-scale hydrogen projects classified as Important Projects of Common European Interest (IPCEI). The projects that comprise this European Union initiative, supported in Germany by the Federal Ministry of Economic Affairs and the Federal Ministry of Transport, span the entire value chain – from hydrogen production to transport to applications in industry.