Siemens Energy to start production of hydrogen electrolysers in Berlin

Thursday, 31 March 2022
0
Robin Whitlock
Siemens Energy is to start production of electrolysis modules in Berlin, at Huttenstrasse in Berlin’s Moabit locality, with start of production scheduled for 2023. 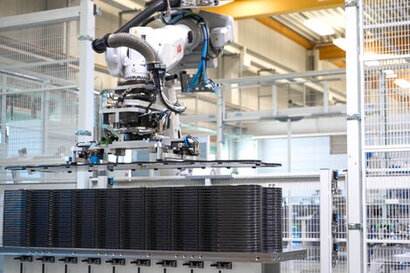 New production lines for the electrolysers are being set up on 2,000 square metres at a cost of around 30 million euros. Currently, the site mainly manufactures gas turbines, which can already be operated with up to 50 percent hydrogen. By 2030, these turbines should be capable of complete hydrogen operation. Siemens Energy is now pooling its expertise in both these areas in Berlin to ensure a reliable and successful energy transition to a new energy mix. This also includes the business field of energy transmission: At the Siemens Energy Switchgear Plant Berlin innovative high voltage products are manufactured, ensuring that electricity reaches consumers reliably.

“With the new production facility for hydrogen electrolysers, we are reinforcing our claim to play an active role in shaping the energy transition” said Christian Bruch, President and CEO of Siemens Energy. “To this end, we are pooling our knowledge in the field of various energy technologies in Berlin. For us, hydrogen is an important component of the future energy world. For this to be economically viable, the manufacturing costs for electrolysers must be significantly reduced. With our new production facility, we are helping to make hydrogen competitive sooner.”

At the Berlin location, the individual electrolyser cells will be manufactured and combined to form functional modules, or ‘stacks’. Depending on the required capacity, these will then be assembled into larger process-based units.

In Germany, this last stage will take place at Mülheim, which is closely associated with the new Berlin plant and complements it perfectly. The critical element is that production is being switched over to mass production: Reasonably priced and affordable electrolysers are the prerequisite for being able to cover growing demand and the future costs of hydrogen. For this purpose, Siemens Energy is relying on PEM (Proton Exchange Membrane) electrolysis, in which water is separated into hydrogen and oxygen using a proton-permeable membrane and electricity from renewable sources.

The key aspects of this process are its high level of efficiency, high product gas quality, and reliable operation with no chemicals or impurities. The latest and most powerful PEM electrolyser product line from Siemens Energy is optimised for applications up to the high hundreds of megawatts, enabling systems of this size to generate several metric tons of green hydrogen every hour. The electricity used in electrolyser manufacture will be sourced entirely from renewables.

Green hydrogen – in other words, hydrogen generated using renewable energy – is a key element in the replacement of fossil fuels with renewables. Hydrogen can serve as a storage medium and also as a raw material for further applications, including synthetic fuels. However, hydrogen molecules can also be used directly as an energy source to generate electricity and heat, which have previously depended on gas. In combination with a massive expansion of renewables, this is a way to ensure the success of the energy transition. The pathways for producing green hydrogen and its derived products are known; the task now is to scale production to industrial volumes. Powerful electrolysers of the type to be manufactured soon in Berlin will form the centrepiece of hydrogen technology.