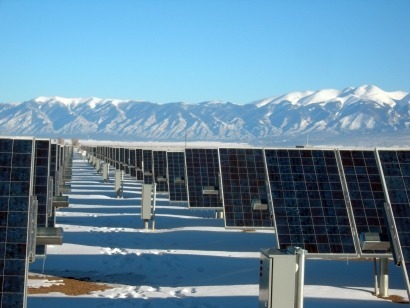 The British company Globeleq Generation Limited (Globeleq), has celebrated the official start of construction of three renewable energy projects in South Africa. One of the projects is the 138MW wind farm at Jeffreys Bay on the Eastern Cape and the other two are 50MWp solar PV plants located in the Northern Cape.

“The start of construction of these three projects reinforces the dedication and leadership of the South African government to climate change and the necessity for diversifying the energy supply for the country,” said Mikael Karlsson, Chief Executive Officer for Globeleq. “It is yet another significant step for Globeleq in building the leading African power company and clearly demonstrates our commitment to deliver clean and reliable energy to the people of South Africa.”

The projects form part of the South African government’s Renewable Energy IPP Procurement Programme and are among the very first large scale renewable power plants to be built in South Africa. Globeleq is part of a consortium in which it is the major shareholder and which also includes Mainstream Renewable Power, Thebe Investment Corporation, various local community trusts and engineering firms Enzani Technologies and Usizo Engineering. An additional member with regard to the Jeffreys Bay wind farm is Old Mutual.

“These renewable energy projects add to Globeleq’s extensive African power generation portfolio and illustrate our ability to mobilize capital for sustainable and productive power generation investments” added Paul Kunert, Head of Business Development for Africa. “Globeleq looks forward to working with our consortium partners, the contractors and community to successfully build the project on time, safely and within budget.”

The projects are expected to create hundreds of jobs during the construction phase and communities will benefit also from revenues once the plants are operational, largely through socio-economic and enterprise development programmes. The plants are expected to generate enough clean renewable electricity to power more than 156,000 homes thereby displacing over 580,000 tonnes of carbon emissions each year. The two solar projects will be constructed by Siemens under a lump-sum turnkey EPC contract and the Jeffreys Bay wind farm will be constructed by Siemens alongside a South African consortium consisting of Murray & Roberts and Conco. Construction is to be managed jointly by Mainstream and Globeleq.