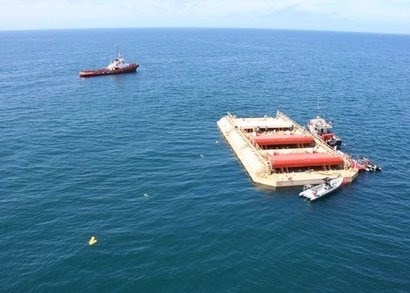 The wave farm would be deployed off the Pacific coast of the country and will be the first wave farm operating in the Americas, as well as one of the largest in the world. It will generate significant employment opportunities by creating a whole new marine energy industry in Mexico serving both local and international energy markets.

AW-Energy first announced news of the project on November 18th in Finland, in conjunction with the inauguration of its wave energy converter test facility in Järvenpää. The facility, which is the largest wave energy test facility in the world, was launched by Finnish President Sauli Niinistö, with an array of national representatives present including the Ambassador of Mexico to Finland Norma Pensado. The Ambassadors of Chile, UK, Portugal and the chargé d’affaires of France were also present at the launch ceremony.

“I am highly pleased to see that we are making progress on various fronts and with the Mexican agreement we now extend our reach of commercial development to eight countries globally” said John Liljelund, CEO of AW-Energy. “While I am excited by the opportunity this brings to AW-Energy as a technology developer, I am equally thrilled that we are now kick-starting the development of wholly new industry in Mexico and the Americas.”

Mr. Gerardo Hiriart, CEO of ENAL added that the pioneering wave energy project, developed in Finland and installed and operated by the specialists of ENAL, could represent the first practical use of the energy of the oceans in México and soon be expanded to other Latin American countries.

AW-Energy is a pioneer is a global leader in wave energy technology, most well-known for its flagship WaveRoller product. This is a submerged wave energy converter based on a hinged panel that is attached to the sea bed in the near shore area. It generates electricity from the movement of the waves (known as the surge phenomenon) and is connected to the electric grid onshore. AW-Energy is based in Finland, and operates in multiple continents.