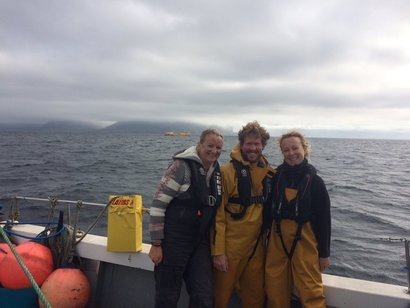 The research was carried out at the European Marine Energy Centre (EMEC)’s grid-connected wave energy test site where Wello Oy’s Penguin wave energy converter has been operating since installation in March 2017. As part of the project, the ecological surveys will take place over three consecutive summers to investigate the cumulative impact of multiple wave energy converters (WECs) on the seabed habitat and associated ecosystem.

The multi-year dataset will assist with understanding the degree of natural spatial and temporal variation of marine organisms at EMEC’s test site. The studies will also provide information to marine energy stakeholders of any positive and negative effects so that they can be optimised and/or mitigated as wave energy technologies develop.

Initial observations indicate the presence of a variety of species, including cod, plaice and octopus, and both sand and rock habitat types. No conclusions regarding the impact of the devices can be made until the end of the project once all data has been collected, analysed and a robust, comparative study can be completed.

“The data analysis will take place continuously throughout the course of the CEFOW project, with further ecological studies taken place throughout the summer months of 2018/19, following deployment of the second and third WEC’s due to be deployed as part of the CEFOW wave energy array" said Emma Sheehan, University of Plymouth University. “As wave energy is still in the R&D phase of development, it is important to monitor the impact of wave energy convertor on the local ecosystem including the abundance of commercially important fish; habitat building biogenic reef species, and water filtering shellfish. By conducting the studies over multiple years, we can build up a robust picture of the test site, and any impact that wave energy deployments may have.”