Wednesday, 09 March 2022
0
Robin Whitlock
The UK Local Electricity Bill has been supported by nearly a majority of MPs in the House of Commons including a cross-party coalition of 116 Conservative MPs, one of them being the Chairman of the influential backbench 1922 Committee, Sir Graham Brady, along with 116 Labour MPs – including Leader of the Opposition, Sir Keir Starmer. 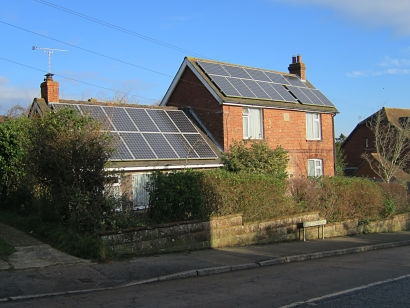 If made law, the Bill would create a new ‘Right to Local Supply’ of energy that would empower communities to sell locally generated electricity directly to local households, businesses and local public services, reducing dependence on foreign gas.

The Parliamentary Environmental Audit Committee recommended the Government implement this change, after their 2021 inquiry found no significant growth in the sector since 2017.

Currently, customers can only purchase electricity from nationally licensed utilities. The national coalition supporting the Bill – including WWF, Greenpeace, Friends of the Earth and the RSPB - say this means that money people use to pay their energy bills is not helping to strengthen local economies or build new local clean energy generation infrastructure. Both are now more crucial than ever, as the UK works to combat the challenge of reducing our reliance on foreign gas imports – the price of which is soaring amid the Ukraine conflict.

Campaign group, Power for People, is pushing for communities across the UK to buy their electricity from local, renewable sources, helping to reduce the UK’s dependency on volatile gas supplies. The group says that, if made law, the Bill could mean community renewable energy growing twentyfold by 2030, taking it from 0.5 percent to 10 percent of UK electricity generation and bringing widespread knock-on economic and social benefits.

The Bill’s cross-party MP sponsors - including lead sponsor and Conservative MP, David Johnston – are in talks with the Government’s Energy Minister, Greg Hands MP, and his department. This comes after MPs from all major parties and nations rallied behind the Bill at an ‘Empowering Community Energy’ Parliamentary debate back in November.

“To be honest, I find it a bit frustrating that people who want to do things that will contribute to helping to address the great challenge that we face, which is to change the way in which we produce and consume energy, find difficulties in their way” said Hilary Benn MP, during the Parliamentary debate.

Energy Minister Greg Hands MP responded that the Government recognise the role community and locally owned renewable energy schemes can and do play in supporting the UK’s national net zero targets and that community groups can be a catalyst in the promotion of behaviour change, which we all know is vital to reaching net zero.

Steve Shaw, Power for People’s Director, who helped steer through the Climate Change Act whilst at Friends of the Earth, added that the biggest threat to human civilisation and the natural world is climate breakdown and that emissions have increased by over 400 percent since 1950, with levels of CO2 at their highest concentration in the past 2 million years, although it is not too late to turn things around.

“The enormous emissions reductions the Local Electricity Bill aims to bring must be a key pillar in our mission to avert climate catastrophe whilst making our energy system more robust and boosting local jobs and the economies of communities across the country” said Mr Shaw.