Friday, 08 June 2018
0
Robin Whitlock
A group of UK citizens concerned about climate change, calling themselves ‘Plan B Earth’, have announced they are going to sue the British Government over what they see as its poor response to climate change. 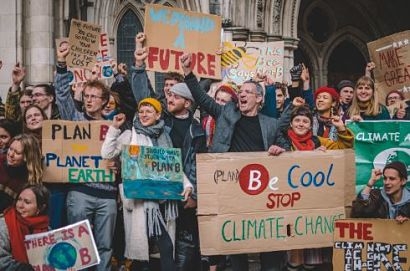 Courtesy of Plan B Earth

Climate change is already causing hundreds of thousands of deaths per year across the globe and is a major factor in provoking the mass migration of people to other countries. It is also a contributory factor to destabilisation of international politics and security, with some observers arguing, for example, that climate change was a contributory factor to the outbreak of the Syrian Civil War.

Plan B Earth believes that the 2°C global average temperature limit committed to within the Paris Agreement represents a ‘cliff edge’ of catastrophic climate change and that exceeding this level would present a possible danger of annihilation for certain countries, particularly small island states. Furthermore, they claim exceeding 2°C would incur a high likelihood of hitting ‘tipping points’, leading to runaway climate change in excess of 4˚C. The Government’s own advisory committee, the Committee on Climate Change, have described 4˚C warming as extremely dangerous, almost certainly meaning the deaths of billions of people and a devastated world for survivors. Plan B believes that the probability of hitting 4˚C this century is high.

The first duty of Government is to protect its people. Plan B believes that this begins by being honest about the nature of the threat. However, the British Government, Plan B believes, does not want to upset powerful vested interests. They say the government’s current emission reductions do not even aim at limiting warming to Paris Agreement the Government has ratified.

Plan B Earth argues that the Government's lack of action demonstrates a serious failure to fulfil its fiduciary duty to uphold intergenerational equity and fundamental human rights. The group’s intention to take the British Government to court for a safe climate target follows the successful deployment of such action in the Netherlands, where the court ruled that:

“If, and this is the case here, there is a high risk of dangerous climate change with severe and life-threatening consequences for man and the environment, the State has the obligation to protect its citizens from it by taking appropriate and effective measures. For this approach, it can also rely on the aforementioned jurisprudence of the [European Court of Human Rights].”

Plan B Earth says that it already has nationally renowned Legal Counsel and legal arguments that have received nothing but promising feedback from a number of top UK climate lawyers. It is now appealing to British citizens across the country to support this action, via social media and its website. The first hearing of the case will be held in the Royal Courts of Justice in The Strand, London, on 4th July.

Image courtesy of Plan B Earth