Monday, 19 November 2012
0
Dan McCue
The European Investment Bank has committed €300 million to support the development of the Ouarzazate solar complex in Morocco, which it describes as the first major solar project in North Africa. 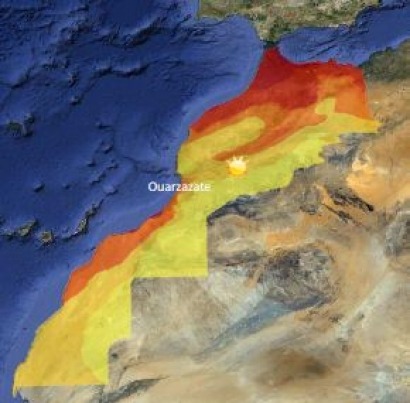 The commitment, which was signed earlier today in Marrakech, represents more than 50 percent of the total cost of the project. In addition to the EIB, signatories to the deal include the Development Agency for France (AFD), KfW Entwicklungsbank (KfW) and MASEN.

The loan package was facilitated by a €30m grant contribution from the European Union in December 2011.

“As the lead European financial institution on this project, the EIB is proud to contribute both its financing and its technical expertise acquired across Europe for all sources of renewable energy," said EIB Vice-President Philippe de Fontaine Vive. " The first phase of Ouarzazate is a milestone for the success of the Mediterranean Solar Plan in the region. It provides a strong and green signal for the future in terms of technology, economic and energy development, and job opportunities.”

This European financing is supporting the first phase of the Ouarzazate solar complex, which involves the construction of a parabolic-trough concentrated solar power (CSP) plant with a gross installed capacity of between 125 and 160 MW and a minimum energy storage capacity of 3 hours. The project will be the first under the Moroccan Solar Plan and the largest project so far under the Mediterranean Solar Plan, whose aim is to deploy 20 GW of additional renewable energy capacity by 2020.

"The EU and Morocco share similar opportunities and constraints when it comes to energy, which makes it important to support the progressive integration of our respective energy markets, as well as the joint development of renewable energy," said Eneko Landaburu, Ambassador Head of the EU Delegation to Morocco. " Today, through the grant provided by its Neighbourhood Investment Facility and the loan provided by the European Investment Bank, the European Union is strongly supporting the first flagship project under the Moroccan Solar Plan."

The Ouarzazate solar complex aims to reach a potential capacity of 500 MW, which is equivalent to powering a city of 1,500,000 inhabitants. Once fully developed, this solar complex will be one of the largest in the world. In its first phase alone, it will avoid the emission of 110,000 tonnes of carbon dioxide per year while developing renewable energy and energy security in Morocco, as well as creating jobs and promoting an integrated local solar industry.

"The implementation of this power plant will enable the breakthrough of low-carbon and climate-friendly technology in Morocco," said Dr Norbert Kloppenburg, Member of the Executive Board of KfW. "At the same time, the country can reduce its dependence on energy imports. With this power plant we are coming a big step closer to realising the ambitious energy plan of supplying many of the Northern African countries with renewable energies."