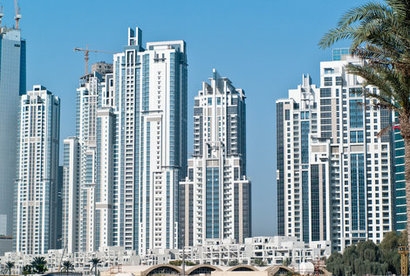 Dubai in the UAE

The report, UAE Energy Diplomacy: Exporting Renewable Energy to the Global South, provides an early road map for global policymakers and industry to initiate smart pilot ventures - notably in the burgeoning energy markets of Southeast Asia, where energy demand will rise approximately 67 percent through 2040, requiring an estimated $2.7 trillion of investment.

The report finds that expansion of ‘clean energy diplomacy’ is particularly timely given that the global energy demand is set to rise by 30 percent by 2030, and the Global South will contribute most of the projected carbon emissions in the coming decades under a business-as-usual scenario. However, most developing countries still lack the financial, technical, and human capacity to effectively expand their energy sectors while simultaneously limiting carbon emissions, and the US withdrawal from the Paris Agreement has left a void that other international actors - whether government or private sector - can strategically fill. Policy engagement and pilot investment projects from renewable energy powerhouses like the UAE could reduce global carbon emissions and unlock billions of dollars of investment opportunities.

As the UAE modifies its foreign aid approach to include capacity building on renewable energy sector development in the Global South, its domestic experience could serve as an effective case study for policy guidance in other countries.

The report identifies six key factors that have supported a robust and engaged renewable energy sector in the UAE, specifically solar:

Start small and scale up targets for renewable energy deployment based on pilot project experience.

Allow utilities to play a proactive role in taking on some project risk in order to ensure long-term success.

Provide clear targets for renewable energy but avoid being over-prescriptive on how to reach them.

Many of these lessons learned are transferable to developing countries which lack the UAE’s financial resources but have high potential for renewable energy development, including across Africa, Asia, and Latin America.

The report also highlights a number of other key findings:

Over the past decade, the UAE has evolved as a global leader in renewable energy innovation. The UAE’s early support for the Paris Climate Change Agreement, the UN Sustainable Development Goals, and the UN Environment Programme Finance Initiative (UNEPFI), as well as its early investment in Masdar as a champion for renewable energy, support for the International Renewable Energy Agency (IRENA), and creation of the Abu Dhabi Fund for Development (ADFD) were all key steps in building early UAE diplomatic leadership on sustainable development.

The record-setting prices for utility scale solar energy (below $.03 per kilowatt-hour) have created solid competition for fossil fuels and made the UAE an ambassador for renewable energy projects, on par with the EU, the US and China. But compared to those countries, the UAE achieved its success with far fewer resources at its disposal. This success positions the UAE well to significantly expand efforts to promote sustainable development in the Global South and lead on renewable energy innovation.

Policy engagement and pilot investment projects from renewable energy powerhouses like the UAE could reduce global carbon emissions and unlock billions of dollars of investment opportunities.

Southeast Asia should be a priority target for UAE clean energy diplomacy. The IEA estimates that Southeast Asia’s energy demand will rise approximately 67 percent through 2040, requiring an estimated 565 GW of installed capacity.

86 Investment opportunities that parallel this demand are significant, with an estimated $2.7 trillion of investment needed through 2040 This will require significant support from international financial institutions and widespread mobilisation of the private sector.

There are three arenas where the UAE can strategically expand its clean energy diplomacy in order to help mitigate carbon emissions in developing countries: capacity building, strategically targeted foreign aid, and increased commercial ties in the renewable energy sector in developing countries. At the heart of these recommendations is an opportunity to build soft power and reap commercial benefits by helping countries throughout the Global South implement renewable energy projects.