Scientists rally in Boston for climate science and against Trump policies

Monday, 20 February 2017
0
Dan McCue
More than 5,000 scientists converged on Boston's Copley Square on Sunday morning to raise their voices in support of science and scientists and against President Donald Trump's policies and expressed beliefs regarding climate change, renewable energy and the continued viability of a planet dependant on fossil fuels. 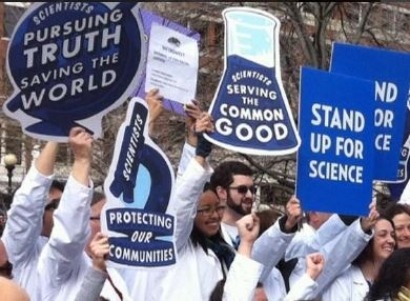 The scientists, many of whom dressed in white lab coats, assailed Trump's effort to discredit science and climate research and roll back Obama administration policies that fostered the adoption of renewables.

"We're really trying to send a message today to Mr. Trump that America runs on science, science is the backbone of our prosperity and progress," said Geoffrey Supran, a postdoctoral fellow at Harvard University and the Massachusetts Institute of Technology who studies renewable energy solutions to climate change, in an interview with the Associated Press.

As he spoke, he was surrounded by demonstrators carrying signs that bore slogans like "science is real," ''Scientists Pursuing Truth, Saving the World," "science not silence," and "Make America Smart Again."

Several people also broke into spontaneous chants of “Stand up for science” throughout the mornign and afternoon.

The scene of the rally was particularly appropriated, established in the late 19th century, Copley Square was the fulcrum around which a number of important Boston cultural and educational institutions were arrayed.

At one time or another, Massachusetts Institute of Technology, Harvard Medical School, the New England Museum of Natural History, the Boston Public Library, the American Academy of Arts and Sciences, Emerson College, and Northeastern University were all located on or near square, as was the city's Museum of Fine Arts.

Many remain cornerstones of the neighborhood.

Sunday was a particularly good day to hold a rally in Boston, with bright blue skies and temperatures in the 50s.

Among the groups whose members participated in the rally outside the annual meeting of the American Association for the Advancement of Science were the Union of Concerned Scientists, ClimateTruth.org, and 500 Women Scientists.

In addition to lambasting Trump himself, many of the protests also roundly criticized the U.S. Senate's confirmation this past week of Scott Pruitt to lead the Environmental Protection Agency.

Pruitt, formerly Oklahoma's attorney general, arrived for his confirmation hearing before the Senate Energy and Public Works Committee last month being something close to a poster boy for Trump’s selection of nominees to head agencies they’ve roundly criticized — or worse — in the past.

Shortly after Pruitt took office in Oklahoma in 2011, he disbanded the unit responsible for protecting the state’s natural resources, and reassigned his staff to file more than a dozen lawsuits challenging EPA regulations.

Pruitt also joined a multi-state lawsuit opposing the Obama administration’s plan to limit planet-warming carbon emissions from coal-fired power plants, and he recently sued the EPA over its recent expansion of water bodies regulated under the Clean Water Act.

Pruitt didn’t back away from those actions, and instead sought to portray them as necessary to protect his state and its industries from federal overreach.

“Environmental regulations should not occur in an economic vacuum,” Pruitt told the committee.

He was confirmed on by the U.S. Senate on Friday.