Thursday, 28 April 2022
0
Robin Whitlock
Renewable energy company Scatec and its partners have refinanced the non-recourse project debt for six Egyptian solar power plants, with a total capacity of 380 MW, through the issue of a 19-year $334.5 million non-recourse Green Project Bond. The refinancing will improve Scatec’s and its project partner’s future cash distributions from the power plants. 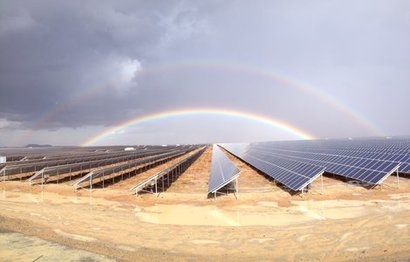 The Project Bond benefits from a Climate Bond certificate from the Climate Bond Initiative and is the first of its kind in Africa. It has been distributed to a consortium of development finance institutions, comprising the European Bank for Reconstruction and Development (EBRD), the US International Development Finance Corporation (DFC), the Dutch entrepreneurial development bank FMO and German Investment Corporation DEG, alongside private institutional investors from around the globe.

Multilateral Investment Guarantee Agency (MIGA), a part of the World Bank Group, and EBRD risk mitigation instruments were incorporated into the structure to facilitate distribution to the private sector investors, including major institutions for whom these are first-ever investments in Egypt. The Government of Egypt has encouraged the refinancing. Mitsubishi UFJ Financial Group acted as arranger.

“The refinance is being granted for six operational photovoltaic power plants participating with capacity 380 MW in the Benban Solar Park with total capacity 1465 MW, initiated as part of the Egyptian government’s ambitious Sustainable Energy Strategy for the period ending 2035” said Dr. Mohamed Shaker, the Minister of Electricity of the Arab Republic of Egypt. “The Benban Solar Park is funded by private sector capital, enabling the Egyptian government to support its goal of generating 20 percent electricity from renewable energy resources by 2022. The Benban Solar Energy Complex was selected as the best infrastructure development project winning the Arab Government Excellence Award in 2020. It was also named as the most successful project implemented by the World Bank in 2019. The agreement signed today is reflecting the huge confidence of the private sector in the Egyptian electricity sector.”