Today’s solar homes draw inspiration from the past

Wednesday, 29 January 2014
0
Richard Crume
The solar homes being built today represent an agglomeration of the latest technologies and designs that work together to reduce energy consumption and create a comfortable living environment. While many of the best ideas for solar homes evolved over the past two decades, some design features that we take for granted have a longer history, dating back to the Case Study program of the 1940s–60s. 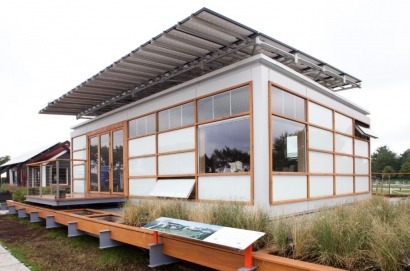 The Case Study program was the brainchild of John Entenza, editor of the magazine Arts and Architecture. Entenza was a visionary who believed that the coming postwar building boom presented a unique opportunity to rethink the American housing paradigm. To encourage innovation, he invited some of America’s best-known architects to submit contemporary home designs that catered to the new postwar interest in low-cost, single-family housing. Ultimately, the magazine published designs for 34 homes and two small apartment buildings. Many, but not all, were actually built.

Entenza believed that as a new world emerged from the ruins of war, housing for returning soldiers and the growing middle class must take a bold step into the future. In his announcement of the Case Study program, Entenza states:

Perhaps we will cling longest to the symbol of “house” as we have known it, or perhaps we will realize that in accommodating ourselves to a new world the most important step in avoiding retrogression into the old, is a willingness to understand and to accept contemporary ideas in the creation of environment that is responsible for shaping the largest part of our living and thinking.

Many of the Case Study homes were conceived as models for mass production of the American suburban dream house. As such, modular construction using standardized parts was common, as was the incorporation of industrial-grade and recycled materials left over from the war.

Several prominent features of the modern solar house originated with the Case Study program. For example, a number of Case Study homes incorporated large, south-facing windows and sliding glass doors for natural lighting and passive solar heating. Many also emphasized passive cooling by orienting the house to capture the prevailing breezes, by using trees and shrubbery for shading, and by incorporating wide roof overhangs, awnings, and blinds to block the summer sun. Landscaping included small ponds or swimming pools beside the homes to help cool the air.

Ultimately, the Case Study designs did not catch on, and the suburban housing boom in America took a different turn. Nevertheless, the program continues to influence modern architecture, and several of the Case Study homes have remained popular tourist attractions over the years, even appearing in Hollywood movies!

For additional information: You can read my feature article on the Case Study program in Solar Today Magazine (page 12).