The Daily Mail can scream, but we need another Gildas the Monk

Saturday, 29 June 2013
3
Robin Whitlock
The Daily Mail is having a field day with its screaming headlines about electricity rationing. “Power cuts in 2 years unless industry cuts back” it yells, repeating the warning of the regulator, Ofgem. 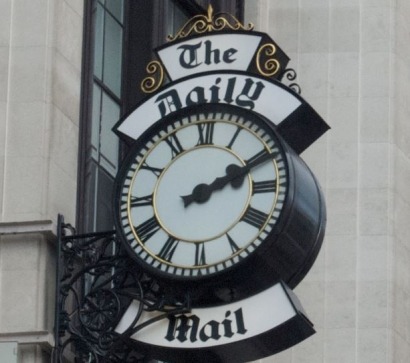 In a dig at those of us supporting the idea of man-made climate change, which actually happens to be a reality accepted by most of the world’s population, the Mail rants about EU diktats forcing coal-fired power stations to close because of their emissions. And so it goes on in the Mail’s usual, sensationalist, panic-stricken style.

The headline story was in response to recent government announcements on energy. These included a new Capacity Market to be created in order to make it easier for project developers to deliver low-carbon infrastructure, Renewable Strike Prices intended to remove price volatility risk alongside the Levy Control Framework – a cap to limit energy costs being passed on to the consumer and finally announcements concerning the amount of shale gas resources in the UK and enabling exploration of those resources to assess their potential.

The government also announced that mothballed power stations could be re-opened in order to prevent an energy shortfall as well as measures to encourage flexible demand response.

Hidden in the text of the Mail article this morning however was a reference to DECC’s questioning of the figures behind Ofgem’s warning about power cuts. It is not surprising the Mail buried this little piece of information given the fact that it appears to completely negate the substance of the article’s panic-driven headline. Neither is it particularly surprising that the Mail completely omitted MP Michael Fallon’s outright dismissal of the ‘rationing’ suggestion, picked up by BBC News.

Nevertheless, there is indeed some cause for concern, but the cause of the problem is easily identified, expressed in two simple words: ‘lost opportunity’. Godfrey Bevan, former Director of Energy Technologies at the UK Departments of Energy and Trade and Industry, pointed to a decade of lost opportunity in the December 2012 of Significance, while Ofgem chief Alister Buchanan hit the nail on the head by stating that although the government in 2008 had some really good plans for the development of renewable energy, the recession got in the way and so we are now paying the price for that.

“Before the financial crisis the government had backed a visionary approach to energy on wind, water and nuclear... then came the financial tsunami” said Buchanan in a later edition of Significance, in an article written by Julian Champkin.

Godfrey Bevan’s conclusions are however more damning Champkin says, and I agree. We’re finally getting to the crux of the matter with Bevan’s statement that “Sustainable and renewable resources are actually huge: they could easily supply all the UK’s energy needs without greenhouse emissions. But their development was neglected during the decade when it was most urgently needed. From the point of view of meeting even the most minimal climate change targets, it is now far too late to catch up.”

Champkin goes on to finally deliver the coup de grace against all the treacherous climate change denying politicians and oil-industry vested interests, on both sides of the Atlantic, that got in the way during the eighties and nineties when environmentalists and scientists were yelling at governments to listen to the science and do something concrete about climate change, particularly by putting in place a substantial renewable energy infrastructure to force emissions down while keeping the energy system going in a clean and sustainable manner:

“Energy supply and emissions reductions are both absolute essentials” Champkin writes. “Depressing, then, that our leaders and our political system have managed, for half a decade, to avoid making decisions on the very clear statistical evidence that was in front of them and have failed to take action in time on either. We now have out-of-control climate change AND a shortage of energy – the worst of both worlds.”

In the 6th century AD the monk Gildas condemned British leaders for their failed policies, particularly the employment of barbarian mercenaries who would later turn on them according to a poster on the Kent History Forum. If Gildas were alive today he would be doing exactly the same thing as he did then, except that in this day and age, the “barbarian mercenaries” are those who continue to advocate fossil fuels while denying climate change as well as the sniveling politicians who support them, advocating fracking and gasification instead of embracing renewables.

And like Gildas, there will come a time indeed, not too far ahead, when those of us who saw the crash coming a long way off, will stand wave our fists at these snakes with legitimately-expressed calls of “We told you so!”

Daily Mail “Electricity to be rationed”

Significance Magazine “Fuel prices, the energy gap and the consequences of ignoring information”

Robin Whitlock is a freelance journalist living in Bristol, Somerset, United Kingdom with a special interest in environmental issues and renewable energy. His blog focuses largely on the renewable energy sector, but nevertheless includes other aspects of environmental debate and discussion as well.

Tags: Climate change ,Renewable energy ,Electricity ,Fuel ,Biomass ,Employment ,Nuclear ,Oil ,United Kingdom ,Wave ,Wind ,Carbón
Add a comment
Timothy
Everyone is trying to make the same old science work in a completely different environment. Turbines of any design are very inefficient. (Sorry Nick Tesla) 16% at best due to accelerated mass. Then they insist on generating electricity with their designs, whether there is a need or not. Chemical storage??? Pleease! Drop the turbines. Compress air, there are hundreds of ways to do that naturally, Then put that compressed air under water below a conveyor connected to a generator. Buoyancy ladies and gentlemen, it will hold up a great iron ship. And you can twist a valve to control whatever output you require on demand without waste of your compressed air. Lets quit messing around and get this done fer crying out loud! I am very interested in anyone’s opinion on this issue, and I would like to begin email communication with anyone else interested in conversation. [email protected]
Brooke Sawyer
Thank you for sharing information on this topic. It is very informative [url="http://www.schooljournalism.org/becoming-your-own-worst-critic-or-how-to-critique-a-newspaper/"]here[/url]
Brooke Sawyer
Thank you for your post! I will use this information for my blog here
pv