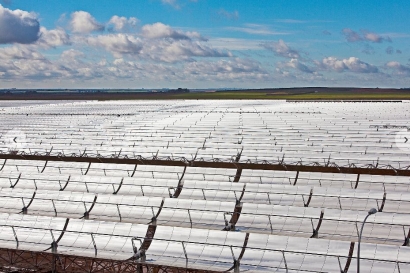 The total value of deal announced Tuesday could climb to €1.12 billion, if certain milestones are met, according to a news release from Acciona.

ContourGlobal, an independent operator of power generation plants with facilities in 19 countries, said it will finance the purchase through a combination of project financing and cash on its balance sheet.

The sale of the Spanish solar thermal assets (Palma del Río I and II in Córdoba, Majadas in Cáceres, and Alvarado and Orellana in Badajoz) will enable the Acciona group to reduce debt by €760 million this year.

It will also rebalance Acciona 's portfolio towards its international business.

Following the deal, Acciona will have a total of 8,772 MW of power generation assets, of which 84 percent are wind farms. The company also has a growing photovoltaic business, as well as hydroelectric and biomass-fired capacity.

It will also continue to own the 64 MW Nevada Solar One plant in the United States  through Acciona Energy International.

The sale is subject to approval by Spain's National Markets and Competition Commission by the shareholders of ContourGlobal plc.