Thursday, 20 September 2012
0
Toby Price
Well they might not be wagons, but solar receivers that will be rolling at the Advanced Technology Centre for Renewable Energies’ test facility in the Tabernas Desert (Almeria, Spain). The research centre has developed what it describes as a “Variable Geometry Central Receiver Test and Research facility”, which it recently presented at the SolarPaces World Conference. According to its developers the new facility could be 17% more efficient than conventional solar fields. 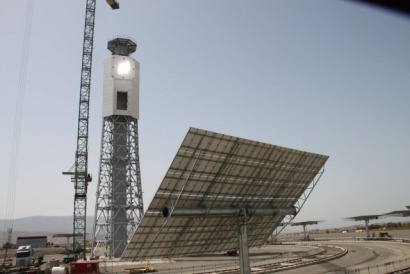 The research facility of the Advanced Technology Centre for Renewable Energies (CTAER), located in the Tabernas Desert (Almeria, Spain) is currently in its last stage of the construction phase and will be operational during the first term of 2013.The facility was presented last week at the SolarPaces 2012 International Congress by Prof. Dr. Valeriano Ruiz Hernandez and Dr. Manuel Silva Perez.

CTAER describes the innovation as “the first solar concentrating system based on the concept of variable geometry” and estimates it may achieve around 17% more efficiency than current plants. The facility is located within the CTAER premises in Tabernas next to the PSA-CIEMAT Almeria Solar Platform.

One of the most characteristic elements of this new concept is the “heliomobile”, the first one of its kind in the history of these technologies. This video shows how the heliomobiles move across the concentric rails to the tower in order to reflect the highest possible direct solar radiation.

Prof. Dr. Valeriano Ruiz Hernández, Chair at University of Seville and President of CTAER, and creator of the project describes the new research facility: “From the Earth’s perspective, the Sun is in constant movement, a fact that we should not forget. This is the reason why I have designed a central receiver test facility, currently in its last phase of construction, which contains a field of mobile heliostats and a receiver mounted on a rotating platform. We have named this concept ‘variable geometry’”.

“In this new concept of heliostats field, the heliostats (from now on “heliomobiles”), during the morning are positioned on the west side of the field; at midday their position moves toward the north of the tower, and in the afternoon they are positioned on the eastside. Throughout the whole day, they adopt different positions in order to redirect the direct solar radiation and to achieve the least geometric loss possible; that is, keeping the cosine of the angle of incidence (the angle between the solar ray and the normal to the reflecting surface of the heliomobile) as close to 1 as possible at each moment.”

According to simulations carried out with the NSPOC programme a field of heliomobiles could achieve improvements in the cosine factor, enabling a significant increase of the efficiency of a present plant (see graph). The results, show that during the sunlight hours of a day, the variable geometry plant increases in average its efficiency around 17% per year. During the sunniest months, improved efficiencies of up to 30% can be achieved.

The variable geometry solar facility is a project designed and developed by CTAER,a private foundation based in Andalucía (Spain) and constituted by a board with public and private participation. The project’s budget during its first phase is €5 million, and it is jointly financed by the Department of Economy, Innovation, Science and Employment of the Andalusia Regional Government (Junta de Andalucía), through an agreement with the Ministry of Economy and Competitiveness of the Spanish Central Government and the European RegionalDevelopment Fund.

This facility is part of CTAER’s more comprehensive plan for developing research infrastructures aimed at offering solutions for improvements in the performance of solar thermoelectric plants of different technologies. The next facility already awarded is a test bench for parabolic trough, which will begin construction in the near future, followed by test benches for the Stirling dish and Fresnel technologies.