Anesco given green light for 50 MW storage facility in Aberdeenshire 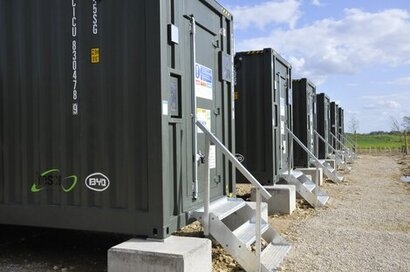 The site is the first one to be developed by Anesco in Scotland and forms part of more than 440 MW of new solar and storage projects the company currently has at the planning or ready to build stage in the UK.

Situated on low grade agricultural land, the site is in close proximity to Rothienorman substation. Once complete, the battery energy storage system will comprise of 15 battery rows. It will offer flexibility services to National Grid, helping balance energy supply and demand and supporting the UK’s transition to renewable energy.

The installation will have a lifespan of 40 years after which time the land will be returned to its natural state. Significant ecological enhancements will be made to the site, achieving a biodiversity net gain of almost 50 percent. This will include planting of native trees along boundaries and down the length of the east side of the build site and the creation of a wildflower meadow. The remainder of the site will also be retained for agricultural use.

“We’re delighted to receive approval for the Rothienorman battery site” said Mark Futyan, Anesco CEO. “Energy storage has a vital role to play in the UK’s transition energy network, providing the flexibility needed to support the growing number of clean power sources. As with all our sites, biodiversity is a key focus and we will be making significant improvements designed to support local wildlife throughout the lifetime of the project.”

Work on the Rothienorman site is expected to get underway next year and to complete in early 2024.

Anesco has a total solar and storage project pipeline exceeding 3 GW. Its operations and maintenance team manage more than 1.4 GW of renewable energy assets, while its revenue optimisation service is supporting investors to achieve the greatest potential return from their assets.

In 2022, the company opened its first subsidiaries outside the UK, with the creation of Anesco Netherlands and Anesco Germany.