Thursday, 13 December 2012
1
Robin Whitlock
ESTIF held a reception to celebrate and elected a new board of directors at its General Assembly in Brussels 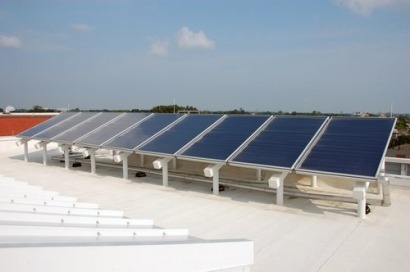 ESTIF was created in 2002 in order to help facilitate the adoption of a single Europe-wide certification scheme for solar heating collectors. This ambition was achieved a year later with the development of the ‘Solar Keymark’ within the framework of Comité Européen de Normalisation (European Committee for Standardization – CEN) and supported by the ALTENER programme of the European Commission. There are now over 2000 Solar Keymark licensed solar heating collectors and systems.

ESTIF’s work has widened over the years to include the promotion of solar heating across Europe and in support of this aim the company is involved in a variety of activities including standardization, research, innovation, market statistics and framework conditions for solar heat and incentive schemes.

“The work done by ESTIF as a solar heating industry association has played a crucial role in the evolution of both market and industry” said ESTIF President Robin Welling, speaking at the company’s ten year reception. “I firmly believe that the industry must support associations and even increase its commitment at a time when developments in the market could lead to disengagement.”

Tags: Solar , Europe
Add a comment
IGggZKpuI
This article has difenitely captured the key essentials that you must know if you want to establish a business or if you want to compete online. Building an effective website is truly a must-do whenever you desire to indulge yourself in an online business venture. I also agree when the writer tackles about the functionality and giving enough time to it.
electric/hybrid