Tuesday, 27 March 2018
0
Dan McCue
The newly-released interactive map, The Evolution of Wind Power, resulting from a project undertaken by The Global Wind Energy Council and Greenbyte, reveals the cumulative installed capacity per country, continent, and the world between 1981-2018. 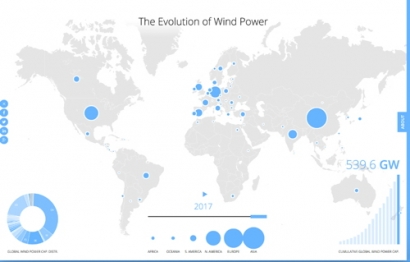 The results seem to show wind power is on a steep growth curve around the world.

Pakistan almost doubled its installed wind power capacity, bringing it to 792 MW in total. Thailand saw a 50 percent increase in installed capacity from last year which gave the country some of the most impressive growth in 2017. It has now reached a total capacity of 648 MW.

Brazil has reached a total of 12,763 MW. Chile and Honduras both grew their installed wind power capacity by more than 25 percent.

Established wind power nations Germany and the USA have kept a steady growth rate with each adding about 10 percent new capacity in 2017.

Other countries that experienced significant growth in installed wind power capacity last year were: Belgium up 20 percent to 2843 MW, India up 15 percent to 32,848 MW and France up 14 percent to 13,759 MW.