Thursday, 02 November 2017
0
Dan McCue
The largest wind turbine blade ever produced in Spain was delivered to Castellón Port on Oct. 20. The LM 73.5 P blade is also the largest to be transported through the country. 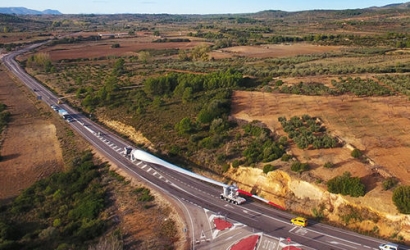 The final destination for the blade manufactured by LM Wind Power is the Merkur off shore wind farm in Germany. It will power GE's Haliade 150-6 MW turbine offshore,

The blade began its journey at LM Wind Power's factory in Castellón, and travelled 45 kilometers to reach the port.

This new size record demonstrates the rapid development of the wind industry in continuously manufacturing longer and more complex blades, designed to lower the Levelized Cost of Energy (LCOE) and serve the growing offshore market.

Castellón Plant Director, Jose Luis Grau said, "LM Wind Power's Castellón plant employs more than 620 people and produces blades up to 73.5 meters in length for multiple customers. This is a strong example of how the wind industry in Spain continues to play a significant role as a source of economic development and job creation."

In total, 198 LM 73.5 P blades will be shipped to the Merkur site. The first blade’s journey took 3.5 hours. The duration is expected to decrease as the drivers perfect their routine over the coming months.

Successfully transporting the longest blade required more than one year of planning and analysis of road conditions by LM Wind Power and GE, as well as active cooperation with the local police, Regional Government, the Minister of Fomento and the Castellón Port Authorities to prepare the route for this large cargo.

Factories, such as the one at Les Coves in Castellón, help make Spain the fourth largest exporter of wind turbines in the world, each year exporting cutting-edge technology valued at more than €3 million ($3.5 million).

Merkur windfarm is located approximately 35 km north of the island of Borkum, Germany, in the North Sea, and consist of 66 turbines that will generate approximately 1,750 GWh annually, enough clean energy to power around 500,000 homes. When completed in the fourth quarter of 2018, Merkur will be one of Germany's largest offshore wind farms.

Photo:  A drone followed the largest blade ever transported in Spain, from LM Wind Power's factory to Castellón Port